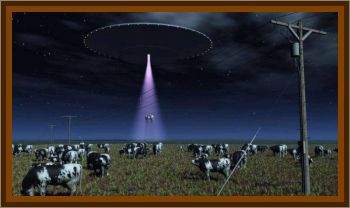 In the winter of 1931, I saw a flying machine, UFO, as I was riding on a horse in the draw of a pasture.

I was 17 and I was riding a horse checking on cattle after a snowstorm and I was about 8 miles Southwest of Holyoke. I went over a small hill and down to a draw that was about 25' to 30' deep. I was heading South and I got to the middle of the draw.

I looked up to the west and I saw an elongated oval shaped flying machine in the air. It was an aluminum color and a door that was transparent like a glass opened. It looked like a doorway and a man appeared that looked human but was not as tall as a normal human. He looked down at me and he had a uniform on that was darker than he was.

I looked back down because I was on a horse that stumbled quite a bit. When I looked up again ASAP there was nothing there so they must have left.