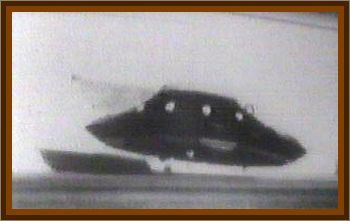 The Holloman saga begins in 1973, when Robert Emenegger and Alan Sandler, two well connected Los Angeles businessmen, were invited to Norton Air Force Base in California to discuss a possible documentary film on advanced research projects. Two military officials, one the bases head of the Air Force Office of Special Investigations, the other, the audio visual director Paul Shartle, discussed a number of projects. One of them involved UFOs. This one sounded the most interesting and plans were launched to go ahead with a film on the subject.

Emenegger & Sandler were told of a film taken at Holloman AFB, New Mexico, in May 1971. In October 1988, in a national television broadcast, Shartle would declare that he had seen the 16mm film showing three disk-shaped craft. One of the craft landed, 2 of them went away. A door opened on the landed vehicle and 3 beings emerged. They were human size, had an odd, gray complexion and a pronounced nose. They wore tight fitting jump suits, thin headdresses that appeared to be communication devices, and in their hands they held a translator. A base commander and other Air Force officers went out to meet them.

Emenegger was led to believe he would be given the film for use in his documentary. He was even taken to Norton and shown the landing site and the building in which the spaceship had been stored and others in which meetings between Air Force personnel and the aliens had been conducted over the next several days. According to his sources, the landing had taken place at 6:00 a.m. The extraterrestrials were doctors, professional types. Their eyes had vertical slits like a cats, and their mouths were thin and slit-like, with no chins. All that Emenegger was told of what occurred in the meetings was a single stray fact, that the military said they were monitoring signals from an alien group with which they were unfamiliar, and did their ET guests know anything about them? The ETs said no.

Emeneggers military sources said he would be given 3200' of film taken of the landing. At the last minute, however, permission was withdrawn, although Emenegger & Sandler were encouraged to describe the Holloman episode as something hypothetical, something that could happen or might happen in the future. Emenegger went to Wright-Patterson AFB, where Project Blue Book had been located until its closing in 1969, to ask Col. George Weinbrenner, one of his military contacts, what had happened.

According to Emeneggers account, the exchange took place in Weinbrenners office. The colonel stood up, walked to a chalkboard and complained in a loud voice:

That damn MIG 25! Here we're so public with everything we have. But the Soviets have all kinds of things we don't know about. We need to know more about the MIG 25!

Moving to a bookshelf, and continuing his monologue about the Russian jet fighter, he handed Emenegger a copy of Dr. J. Allen Hyneks The UFO Experience, with the authors signature and dedication to Weinbrenner. It was like a scene from a Kafka play, inferring from the colonels odd behavior that he was confirming the reality of the film while making sure that no one overhearing the conversation realized that was what he was doing.

The documentary film UFO's Past, Present & Future was released in 1974 along with a paperback book of the same title. The Holloman incident is recounted in 3 pages of the books Future section. Elsewhere, in a section of photos and illustrations, is an artists conception of what one of the Holloman entities looked like, though it, along with other alien figures, is described only as being based on eyewitness descriptions. Emeneggers association with the military and intelligence he had met while doing the film would continue for years.