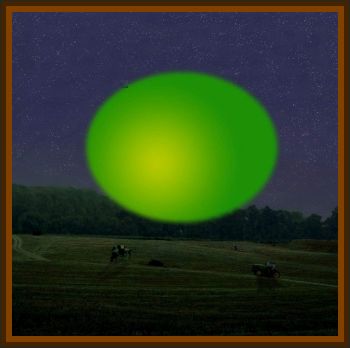 The date, as best as I can remember was early August of 1975.

I was 10 years old. This sighting occurred in my home town Hollis, NH, which bordered the #1 city in the country to live in at the time, Nashaua N.H.

Hollis sits a little higher in elevation than Nashaua which gave us a clear shot of the whole city of Nashaua, including the municipal airport, and it was common to see planes take off and land at night. We must have been 4 miles away, I would quite frequently watch the planes as they made there approach to land, but this evening and the next several nights to follow changed me and are etched in my memory, Forever.

Nashaua sat southeast of our yard and at night the lights from the city cast a glow over it, above which was the glow from the setting sun and above that the dark of space.

The planes were never very high, hardly ever over the glow of the city. And you could easily make out the strobe on them, they had a predictable path and were easy to identify.

The objects we saw were coming in at a very high speed from the black of space, from out of the star field. They were circular luminescent spheres and seemed to arrive in 2's or 3's or more.

They chased each other performing remarkable maneuvers, reversing direction at speeds that would have turned any human being into a puddle.

They would take off in different directions at such a speed you could not track them with your eye. I ran inside and got my parents out to look, they were speechless.

After a wile the neighbor kids saw us looking and came over, we all stood there staring not saying a word.

Soon after 2 younger neighbor boys arrived they bolted home and returned with there brother and parents in tow. Now there were 8 of us all looking at the same objects.

To this day I have never seen anything like them. This continued for about a week, it eventually became almost normal to see them each night, and soon my interest waned and when I remembered to look again they were gone. I did watch them for at least 5 or 6 nights in a row.