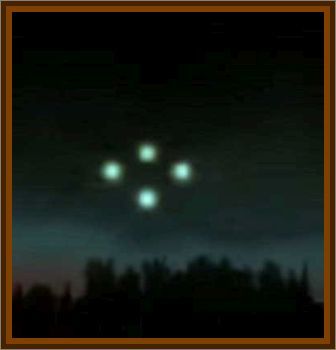 During the March evening, residents of Southwest Michigan began seeing strange things in the skies over Lake Michigan to the south of Holland. Blue, white, red, & green lights, sometimes attached to cylindrical objects, and sometimes performing unusual maneuvers, were reported. 911 operators began receiving calls at around 9:30 p.m. about something that looked like a string of Christmas lights way up in the sky. It wasn't just a few people reporting these things, it was counties all up and down Lake Michigan. Some sources said 300 witnesses, including several police officers, saw the lights.

There were so many reports that one of the Ottawa County 911 operators decided to call the National Weather Service radar operator at Muskegon. The conversations that 911 had with the NWS operator were taped and later made their way into the media. The radar operators voice could be heard describing abrupt movements of the object and multiple objects appearing on the radar screen. He said that what he was seeing could not be precipitation, especially at that height. One object was tracked moving twenty miles in 10 seconds.

Holland police officer Jeff Vellhouse spoke to the operator of the Muskegon radar that picked up the radar tracks, He said he had 3 things on his radar, and they were in a triangular shape. He said they hovered over Holland and moved southwest, one would move out of the triangular pattern, then move back in. There were 3 and sometimes 4 blips, and they weren't planes. Planes show as pinpoints on the scope, these were the size of half a thumbnail. They were from 5' to 12,000' at times, moving all over the place. Three were moving toward Chicago. I never saw anything like it before, not even when I'm doing severe weather.

It was said that there was no NWS written or taped records of the radar contacts themselves, but Dave Reinhart of Bureau of Investigators of Mysteries & Unusual Phenomena claimed to have received copies of the NWS radar operators report in late 1994. He also said that he had talked to an individual referred to as Fred, who worked at Area 51 and who had knowledge that what occurred on the night of March 8, 1994 was some sort of rendezvous of UFOs from the east, west, north, and south. Scott Ruiter, of Grand Haven saw the lights at 10:30 p.m. March 7, It looked like about 5 airplanes following each other fairly closely. One would blink, then the other, other and other, right to left.

The NWS later tried to downplay the radar trackings, There is no relation between the UFOs and the radar tracks, said Dean Gulezian, the weather service's area manager for Michigan. Gulezian said that although the radar did show some echoes, One key thing is the eyewitnesses saw these things at tree top level, while the radar echoes were from an altitude of 10,000' or higher.

Randee Murphy & her husband, of Ada Township, observed a huge shape for about two minutes as it flew slowly about 100' over the woods outside their home. It had 4 lights, and made a soft, whirring noise. It sounded like a single jet engine.