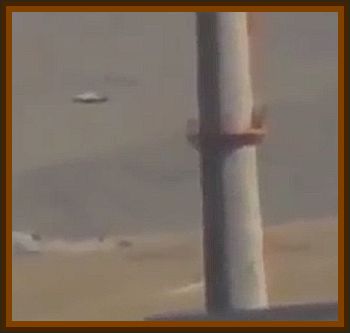 While on duty as a Military Policeman on the Main Gate, witness Floyd observed 2 unidentifiable aerial objects near the smokestack of the Chevrolet Assembly Plant which is adjacent to Camp Holabird.

These objects appeared to hover between the smokestack and a large tree, a relatively short distance away.

Floyd described the objects as disk shape, much like an enlarged silver dollar, very shiny, but at such a distance as to prohibit actual observance of any specific color.

A comparative measure as to the actual size of the objects was estimated as being approximately one half the diameter of the Chevrolet Assembly Plants smoke stack. Approximate angle of elevation during the period of observation was estimated as about 15º. The objects seemed to be proceeding in no apparent direction, but because of the uncertainty concerning the distance of the objects from the observer, it would be difficult to estimate any definite speed.

Floyd heard no sound that he could attribute to the objects and saw no flames or exhaust. The objects appeared to be without fins, canopies, or antenna. Weather conditions at the time of observation were evaluated as relatively clear, no clouds were present, although a slight ground haze is thought to have existed.

Position of the sun at time of observation was estimated as being 15º in azimuth south of the objects, and an undetermined angular distance above. It was impossible to establish the manner of disappearance of objects in as much as the objects left Floyd's field of vision during an interruption caused by persons passing through the gate.