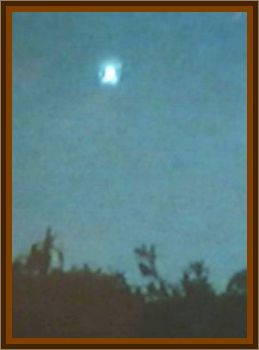 They remarked to each other about it then went to bed in sleeping bags as we were in training at a military camp.

The guard told the story the next day. He said as soon as the NCO's went to bed he saw the craft in the ravine to the west of our position. Not knowing what to do, he hollered for anyone.

Only the next day would one of the NCO's report he heard him holler but could not get up. He was a seasoned military man and this behavior was abnormal.

The next thing the guard related was three beings exited the craft and came towards him saying, in his mind:

Don't be afraid we don't want to hurt you.

The guard became hysterical and threw an aiming stake at the three entities.

The next thing he relayed was one of the beings was behind him so he ran away about one quarter mile, to another training site. Trying to get some of the other members there to come back with him with no success.

They calmed him and said wait until daylight. He did so and came back to our position at daylight, and said he saw a silver cigar shaped craft in the ravine and thought to himself:

We all must be dead.

He ran back to the previous position and relayed the information to them. Still they would not come with him to our position.

We awoke to find no guard on duty and at the same time saw the guard aproaching us from the hill crying.

I thought you were all dead.

That is where the story began for me. This guard was exited from our company and the commanding Colonel said since only one person saw the actual event he couldn't file an official report.

The tracked 13 ton vehicle I drove was completely fried as far as electronics go. I have no doubts I will never know what happened that night.

But wish I could.