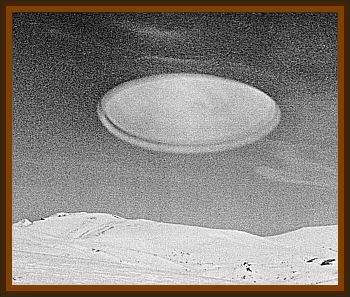 About 6:20 p.m. local time in Ouzouer-sur-Loire, France a 50 year old couple, several other witnesses, and gendarmes watched a silent, 15' tall cone shaped UFO only 60' from the ground fly away toward the southwest.

Two hours after that, at about 8:30 p.m. in Hochries, Germany near the Austrian-Bavarian border, Friedrich Lennartz, 33, and Peter Zettel, 29, had a close encounter of the second kind when a multicolored, ovoid UFO responded to a red signal rocket they had fired to get the UFO’s attention. The UFO had been hovering near a mountain ski resort with the pointed end up.

Its size was estimated as 10' in diameter and 40' tall. The top portion looked like a yellow dome. 4 rows of colored lights, red/green/blue, and white, rotated counterclockwise around the lower portion.

They experienced loud static on their short wave radio as the UFO changed color to a dazzling red, made a 90° turn, and sped toward the witnesses, traveling 3½ miles in 10 seconds.

It hovered close to their mountain for 2 more hours as their dogs whimpered to be let into the cabin, then shot upward at a steep angle at a breakneck speed.