Striking Of The HMAS Hobart 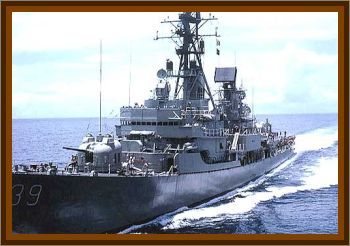 In June 1968 Australia was dismayed by the news that the guided missile destroyer HMAS Hobart had been badly damaged by friendly fire in Vietnam: Two crew died and seven were wounded during the USAF attack.

On Friday, June 15, 1968, Allied forward spotters along the eastern part of the Demilitarised Zone, a 6 mile wide strip separating North and South Vietnam, reported seeing about 30 strange slow moving lights in the night sky. At the time the belief was these were lumbering North Vietnamese Russian-built M-14 Hound helicopters ferrying men and materiel over the border.

After the sightings, Allied Command, fearing another Tet Offensive style build up, rushed more anti aircraft guns to the border, and placed Phantom fighter bombers at Danang Air Base on standby, and it also asked available Allied warships to patrol the DMZ coast. HMAS Hobart II one of those warships that responded.

That night, the forward spotters along the eastern DMZ again reported the enemy helicopters had reappeared, and the Allied forces sprang into action.

Details of the subsequent aerial melee remain sketchy, but it is known several US 7th Air Force Phantom fighter bombers soon arrived on the scene and began firing on the intruders, and were supported by anti aircraft ground fire. During the allied attack the enemy helicopters were seen to move down the east coast and then out to the sea, and there things went terribly wrong.

A US Navy Board of Inquiry, which investigated the Hobart incident for the Australian government, found shortcomings of the Phantom's radar system were partly to blame.

Reported as: To stop big targets flooding the radarscope, the radar had a cut off mechanism, so the returns from a warship and a slow moving low flying helicopter could appear similar on screen.

After the lights fled seaward, the first friendly fire incident occurred shortly after midnight when the US Navy swift boat PCF-19 was sunk by three air to air missiles while patrolling some miles south of the DMZ. Five of the seven crew died.

At about 3:30 a.m., the Hobart was patrolling, blacked out and maintaining radio silence, near Tiger Island, about 12 miles off Cap Lay, when her radar room detected a fast, in coming aircraft. The IFF, Identication Friend of Foe, system indicated it was friendly and the ship was attempting to establish further identity when a Sparrow air to air missile struck her amidships on the starboard, right, side. The missile penetrated the alluminum hull and exploded killing Ordinary Seaman R.J. Buttersworth and wounding two others.

While the crew was rushing to Action Stations, two more air to air missiles penetrated the starboard side and killed Chief Electrician Hunt and wounded several others, and narrowly missed a magazine. Hobart fired five rounds from a deckgun, but the swept winged attacker escaped.

Eventually, the Phantom pilots involved in the operation that night and early morning, were recalled and grounded.

After daybreak, US helicopters airlifted the wounded Australian sailors to Danang and the damaged Hobart went to Subic Bay, Philippines, for repairs and was off the scene for five weeks, and that night DMZ lights returned.

Whatever the lights actually were remains a subject of conjecture, but it appears they were sighted for some weeks and went unchallenged. A week after the Hobart incident the Melbourne Sun noted:

Sightings were reported by radarmen in Quang Tri Province about five miles below the border zone. It was the sixth time since last Saturday that such sightings have been reported, US command has ordered its fighter bombers and artillery to withhold fire, not wanting a repeat of the incidents in which the allied ships were fired upon.

Also adding further to the mystery, no wreckage of downed enemy choppers was found.

No physical evidence of helicopters destroyed has been discovered in the area of activity nor has extensive reconnaissance produced any evidence of enemy helicopter operations in or near the DMZ.

In 1996 obart's skipper was interviwed, the late Ken Shands, and he also said:

Neither before nor after the incident, was there any report by any of the ships of a helicopter being there, around Tiger Island. Now having said that, the captain of one of the American ships told me later at Subic Bay that he thought there were helicopters there, but the fact is he didn't report, and if he believed there was a helicopter, it was his duty to report it at the time, but there was no report.

The events of that night have doubtless raised much discussion, it was the RAN's costliest day of the entire war, and Australian navy history books mention: unusual atmospheric conditions over the DMZ, insect swarms or bird flocks as possible sources of the sightings, but were they unidentified flying objects?

General George S Brown was commander of the 7th US Air Force and deputy commander for Air Operations, Military Assistance Command Vietnam from 1968 to 1970, and so was in command of the Phantoms involved in the snafu. In later years he rose to chair the Joint Chiefs of Staff in Washington. In 1973, he fronted a Chicago media conference held to discuss the North American UFO flap of that year, and while airing his views on UFOs at the conference he said:

I don't know whether this story has ever been told or not, but UFOs plagued us in Vietnam. They weren't called UFOs they were called enemy helicopters, and they were only seen at night and they were only seen in certain places. They were seen up around the DMZ in the early summer of '68, and this resulted in quite a battle. And in the course of this, an Australian destroyer Hobart took a hit, there was no enemy at all involved but we always reacted. Always after dark. The same thing happened up at Pleiku at the Highlands in '69.

George Filer, today Director of the Mutual UFO Network Eastern, USA, served as a USAF intelligence officer under General Brown during the Vietnam conflict, and he has also said:

In 1968, I briefed General Brown the USAF Chief of Staff most mornings on the intelligence situation in Vietnam, a lot of times we'd get UFO reports over the DMZ.

The late Bill Cooper served as a patrol boat captain in Vietnam from 1967 to 1969, and during a talk at the 1989 Los Angeles UFO conference he said:

After about five months I was sent up north to the DMZ, to a place called Qua Vieaf, perhaps Qua Viet, on the Tacan river, It was while there that I discovered that there was a tremendous amount of UFO and alien activity in Vietnam. It was always reported in official messages as enemy helicopters. Now any of you who know anything about the Vietnam war know that the North Vietnamese did not have any helicopters especially after our first couple of air raids into North Vietnam during 1965. Even if they had, they would not have been so foolish as to bring them over the DMZ, because that would have ensured their demise.

Cooper later recanted his belief in an alien presence and instead insisted UFOs are technology originally developed by the Germans in their secret weapons programs during WW-II, by geniuses like Nikola Tesla and many others. However the mystery of 1968 DMZ lights marched on, and the following is from another American patrol boat crew member.

Jim Steffes, ENC, USN Retired, served on the patrol boat PCF-12 on the night of the Hobart incident, and he confirms strange goings on in the sky. In his article: The sinking of PCF-19 as seen from PCF-12, he states the PCF-12 met the ill fated PCF-19 at sea that night to fix the PCF-19's radar. At approximately 12:30 a.m. the PCF-12 received a flash traffic that PCF-19, the first friendly fire target, had disappeared in a flash of light. The PCF-12 reached the scene as Point Dume was pulling the two badly wounded survivors aboard. As PCF-12 searched in vain for more survivors, she found she had company.

As he and the crew peered into the darkness, the moon sometimes behind clouds, we spotted two aircraft hovering on our port and starboard beams. They were about 900' away and 100' above the water. As the boat swung around to put the aircraft ahead and astern of PCF-12, I could hear Mr. Snyder, the Officer In Charge, requesting air support and identification of these helos. The answer from the beach was no friendly aircraft in the area, have contacts near you on radar and starlight scope.

Steffes says he saw one helo in the moonlight and believed It had a rounded front like an observation helo and it looked like two crewman sitting side by side. Then, I watched as tracers began to come toward us as this helo opened fire. The guns were from the nose of the helo. Our guns opened up and I ran back to my position as the loader on the after gun. We heard a crash of glass and a splash as one of the helos hit the water, the other helo broke contact and left the area.

Steffes says for the next two and one half hours the PCF-12 played cat and mouse with one or more helos, opening fire whenever they moved in. He also observed the Point Dume firing tracers at blinking lights moving around her in the air. All the radios were crackling constantly as friendlies were checked out. The result was no friendlies, these had to be North Vietnamese.

Then, three and a half hours later, at about 3:30 a.m., military jets roared overhead and after they acknowledged the PCF-19's position, he soon heard explosions and gunfire to the north, the Hobart incident? As dawn broke, we could only see the shoreline and the Point Dume.

We continued to monitor and track these lights for several weeks after this up until September, I know what the official story is, but this is mine as true and complete as I can remember.

Jim Steffes' story of course raise many fascinating questions including:

Did the PCF-12 crew fall victim to cultural tracking: aliens using their advanced technology to mimick our technology to interface with humans?

If the lights were North Vietnamese observer helicopters? Why did they fly around for hours with their lights on, why weren't they shot down, and why was no helo wreckage ever retrieved?

Many Ufologists believe alien visitors have long been studying human wars, and this may have been the case in 1968.

Hobart served out three tours of duty in Vietnam, however it seems after 1968 she had an extra crewman.

A Signalman, who served on the ship during the 1990s, says that one morning at 4:00 a.m. when the warship was approaching Hobart, Tas., he was climbing a flex ladder to the flag deck when he felt the ladder move below him, then felt something actually walk past/through me on the ladder. Then, when he reached the flag deck and entered the Signalmans Shelter, he sensed someone in there with me and could hear them breathing as though they had been running or working hard.

The Signalman later learnt from the Chief Coxswain, a 15 year veteran, that a Leading Seaman Signalman, had been killed while scaling the ladder to action stations in 1968: Apparently, the ship took a missile hit and a piece of shrapnel took this poor man's head clean off his shoulders.

During the late 1990's when the Signalman was reposted to the ship, he sent a young sailor up the ladder to test the waters, and the bloke also came down shaking.

The Green Ghost, as the ship was also affectionately known, was decommissioned in May 2000, and scuttled at Yankalilla Bay, south of Adelaide, in late 2002, where she is now a scuba dive spot.