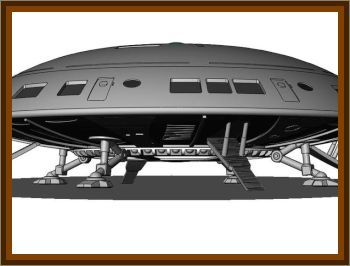 H.M., a British instrumentation engineer, had driven part way up a mountain called the Drakensteen, 7 miles from Paarl, and was just turning back when a man appeared, waving his arm to stop the car, and asked:

Have you any water?

You see, we need water! he said.

H.M. offered to take him to a stream, the man asked if it was far away, and on hearing it was only 1/4 mile, got into the car. H.M. offered an oilcan as container for the water.

That will be all right, said the man.

When they got back, the man pointed toward the mountain, into the area darkened by its shadow, saying:

So H.M. drove into the shadows, and discovered, about 100 yards from the road, a lenticular object with squarish windows around its circumference, standing on 2 broad feet. It was 35' to 50' in diameter & about 13' high. Between the supports legs a flight of steps led up to a lighted opening. The man then invited the dumbfounded H.M. to enter the UFO, and with a friendly gesture, persuaded him to do so.

Standing in the doorway, he saw that a circular bench, or couch, ran all around the circumference, in the center was an array of about Eight 3' hand levers projecting from a rectangular aperture in the floor, each ending in a sort of fork, like that of an old hand brake, and beyond these was an object shaped something like an upright piano perhaps an instrument panel, though no dials or instruments were visible. The white light came from no visible source. In the craft were 4 more men, one of whom was lying on the couch, H.M.'s companion explained that he had got burnt in a slight accident. H.M. was not permitted to approach him. All the men were short, 5' to 5'3" tall, and wore belted beige laboratory gowns extending below the knees, with trousers and shoes visible below. They totally ignored H.M.

H.M.s companion gave them the water, on being asked if they needed a doctor, he said no. The he asked if H.M. had any questions about the craft. H.M. asked where the engines where, he replied:

We don't have any engines. Pointing at the levers.

We nullify gravity, that is how we rise.

Asked how this was done, he answered that they used a very heavy fluid, which circulated in a tube at near light velocity, creating a magnet. H.M. said such a speed was impossible.

No, it is simple, when the fluid is leaving the tube, it is already entering a the other end, thus its relative speed is infinite.

H.M. asked where they came from, he pointed at the sky and said, From there, to more specific questions he would not reply.

After 15-20 minutes of conversation, the man pointed toward the door and invited H.M. to leave, which he did. About 45 minutes had elapsed since the man had first accosted him. The next day he went back to the spot, and found some very strange marks. H.M.s conversation seemed older than the others, perhaps over 40. The mens bodies and faces were normal, perhaps with somewhat pronounced foreheads, their hair short and chestnut colored, none showing any traces of beard growth. Their hands seemed delicate, like womens. H.M. told this story to the investigator in 1977, while in Spain, doing work for a Spanish firm. He had never divulged it before.