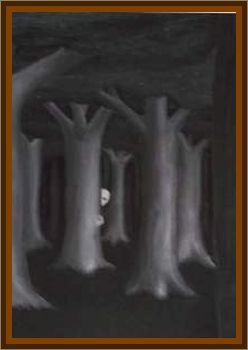 It was a warm summer night I was sitting in a pick up truck, waiting for my cousin to come out of his girlfriends house, when I saw a man hiding behind a house two houses away he didn't want to be seen.

This is in the country, he went over the fence and into the woods, 5 minutes later I saw four bright lights in the sky just above the trees in the same direction the man went. 10 minutes later my cousin got in the truck I told him what I had seen and pointed and the lights were coming up from behind the trees, when it got above tree top the lights went off and it was still rising. We pulled over and cut the engine and it had no sound. When it go a few hundred feet in the sky it just sitting there and we sat and watched.

It was a disk shaped craft with a tail fin like a airplane, and one red light on the tail.

Later that nite it hit me that the man knew the craft was coming before he went into the woods.