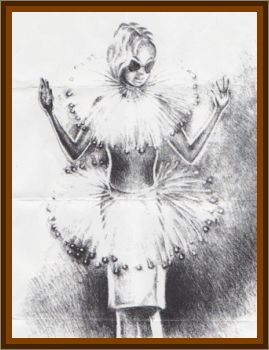 There was no space ship or typical little green men.

Just a pretty blonde, dressed strikingly in a white ballet outfit, whose penguin like walk made her stand out from the crowd.

Yet she is no average Hampshire girl, but the vision that has left one city councillor believing he met an alien.

Winchester councillor Adrian Hicks claims to have experienced a genuine close encounter with extra terrestrial life during a stroll down the city's busy High Street on a Saturday afternoon.

Hicks recalls: I was near The Works bookshop when I saw this strange woman, a humanoid walking with a penguin like gait. She had very large prominent eyes and was twirling her hands in a circular motion. She seemed friendly and totally at ease with us. She wasn't scared, she was smiling, and seemed to be enjoying herself among us. She walked very slowly up the High Street. I remember she was very interested in the clock over Lloyds Bank. She was taking it all in. She was human enough to get away with it. Everybody's heads were turning.

Cllr Hicks, an orthopaedic technician in the A&E department at the Royal Hampshire County Hospital for some 35 years, said he saw the creature at about 1:30 p.m. on a Saturday in late January or early February 2004.

For five years he remained silent about his experience because he did not want it to jeopardize his chances of election to the city council.

Now, two years after securing a place for the Liberal Democrats covering the St. John and All Saints ward of Highcliffe, St Giles Hill, Bar End and Winnall, he says he is willing to risk ridicule as he tells of the encounter for the first time.

Urging others who witnessed the spectacle to come forward, including a woman whom he is certain took pictures, This was definitely a close encounter of the first kind, He added.

I was very confused and shocked. I was going to say: Excuse me, you're not from around here?, but I thought it best to leave her alone. I think we have established contact, because I have seen this being in the High Street. Other people will have seen her. I would like them to come forward.

Cllr Hicks, of Granville Place, Wharf Hill, said he thinks the sighting of the alien is linked to the appearances of lights in the sky over St Catherine's Hill. He said several other residents in Winchester have regularly seen the lights, at about 10,000'.

In August 2004 he saw five vertical lines rising over Chilcomb military ranges before scattering away.

Mr Hicks has a theory that the extraterrestrial is linked to covert US and British military at Chilcomb and the pyramid at Intech which may be some kind of signpost. He said: Clearly there are UFOs flying around and I'm keen to set up a UFO watch group for Winchester.