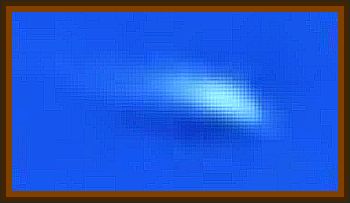 I think I was about 12. I was sitting in my room, which was a loft room with roof window, watching TV.

It was around 7:30 p.m. and was quite dark out. I start to feel strange, almost like my mind has sunk backwards further inside my head. I try to move but I can’t. I can move my eyes a little. I become aware of a pulsing noise, like a electrical rumble.

Then I see a light moving across the window, it's not just a point of light but I can see the shape of it and even some surface details.

Whatever it is has just gone almost right over the house. When its moved further away I find I can move again and run to the window, which was already open. I watch as it hums along away from me. Then it goes behind some trees.

I run downstairs and out of the from door into the road. I can see it again but its pretty small now. I’ve grabbed a pair of binoculars on the way out and I look some more. Then, completely unlike me, I give up watching and go inside.

I try to draw what I saw and I remember talking to mum about it but she pretty much blanked me. She was in the kitchen and it faces the way it would come…so maybe she saw it and was spooked.

Very very spooky, I didn’t tell anyone for about 2 years and then it was my brother. Then I didn’t speak of it again for a long, long time. I almost convinced myself it was an air balloon, but it was glowing greeny/yellow and was like a slightly flattened half sphere shape with 3 curved shapes on the bottom.

I have just started looking to see if anyone else reported seeing it, put my mind at ease. I thought I should report it finally.