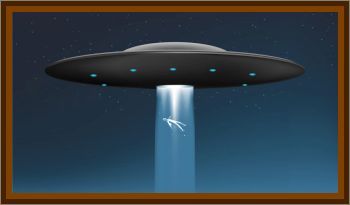 William J. Herman had seen strange objects over the area. He spotted a silvery disk shaped object, about 60' in diameter, performing triangular maneuvers overhead. He ran towards the object, cutting across marshy ground near a river.

The object suddenly rushed towards him, he started to fall when a tubular beam of blue light enclosed him. The beam of light led to the craft, now hovering nearby.

He became disoriented and numb, then lost consciousness. He woke up lying on a table in a hospital like room that glowed with a red light. His shirt was open and a cold metallic box sat on his chest. Three beings were in the room and were looking at a row of flashing lights and a TV screen. One being spoke by using telepathy to the witness and led him through a curving hallway and a small airlock to a room filled with computers and other equipment, it was apparently the control room.

The beings were humanoid, with large bulging and hairless heads, almost jawless, with small mouths, slit nostrils and no ears. The eyes were large and glowing and seldom blinked. The beings were 4' to 5' tall, seemingly frail with pale, soft skin. They wore red overalls.

One of the beings appeared to be the leader and guide. The leader told William, among other things, that they were from Zeta Reticuli and that time was short for humanity. He was then led back to the initial room and made to lie down on the table again. He felt relaxed then passed out.

Soon he found himself on the ground looking up as the object rose away from him.