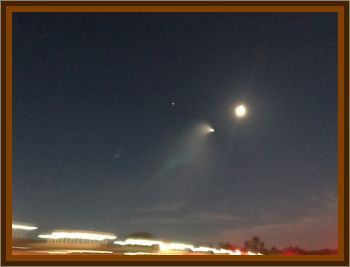 I am reporting this for my grandmother as she is 93 yrs old.

In August of 1947 while they were traveling from Kansas City, KS to Amarillo TX. The family had stopped in Henrietta, OK to visit with friends before heading home to Amarillo, the family was traveling into the night and decided to pull off the road to rest a few hours.

This was on Route 66 about 100 miles from Henrietta, OK. Since it was so hot they had some blankets to lay on the ground, my grandmother and her brother, now deceased, were talking and looking at the stars. Everyone else was asleep and all of a sudden there was a bright light above them so bright it was just like daylight. It lasted about 30 seconds, then it was gone.

My grandmother and her brother were very frightened. To quote her, my brother had been in WWII, and has seen everything, and he was very frightened. They thought they should have woken up the 2 kids and my grandfather but they did not. They knew it was not an airplane because it did not make a sound. Her memory is excellent she said they had taken this trip in a 1936 Ford.