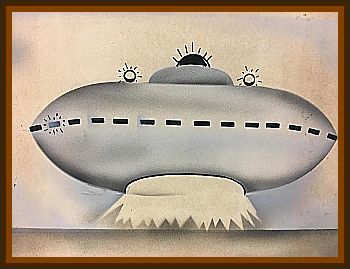 Beverly Bussels and her brother Bruce, students at Tuckahoe Junior High School, saw something very unusual one night while looking out the window of their Henrico County home. According to the youth, what they saw was an aluminum colored apparition right out of a science fiction movie. It was complete with lights and sounds.

Beverly and Bruce’s mother said she heard a sound, It was a whine like a generator or a turbine. It would start at a real low pitch, then increase in intensity and tone level until it ran out of audible range.

Then all of a sudden it would start over again, low, just like that, she said.

While her children called for her to come see the unidentified object, Mrs. Bussell’s did not make it to the window in time.

Mimi, the Bussell’s dog approached the object and barked at it wildly. A dog across the street joined in.

After making a lot of noise, the object rose into the sky and sped away.

Mrs. Bussells called neighbors to ask them if they had seen or heard anything but all of them had been watching television or were otherwise engaged and did not see or hear the object.

In all, the Bussells estimated they saw the object for 15 to 30 seconds, but heard the sounds for several minutes before. The family consented to tell their story after the National Investigations Committee on Aerial Phenomena learned of the incident and called The News Leader. Don Berliner, an aviation writer and NICAP official, said that many recent UFO reports described an object hovering low over the roadway and unusual sounds---many of them whining noises, like turbines.