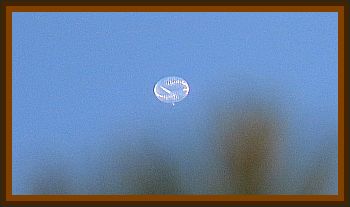 At around noon, cell biologist, Mr. Henri was in his garden in the small town of Laxou near Nancy in northeast France.

The sky above was clear of clouds and a perfect blue in the glow of the early afternoon sun.

However, the serenity of the moment was shattered when a flying machine came out of the sky, its structure shining brightly in the sun, although not hampering his vision, and seemingly arriving in his location out of nowhere.

Although the object had taken him by surprise, the speed was relatively calm as it continued to descend. Thinking it would pass over him, Mr. Henri eventually backed away slightly as the object appeared to head straight towards him. Then, it stopped, hovering around 3' above the ground.

From this angle, he could see clearly the oval, disk like shape of the metallic craft. He would later describe the craft as having a metallic appearance similar to polished Beryllium. The upper half appeared to have a strange blue/green color to it.

As he stood staring at the hovering oval object, he noted how it remained completely silent. Furthermore, he couldn’t feel any excess heat or any apparent effects of radiation. The craft would remain in place for around 20 minutes in total.

During this time, Mr. Henri would locate his camera and attempt to take a picture. However, the device, already showing signs of wear and tear, would jam.

Then, out of nowhere, the craft would rise into the air and continue upwards in a direct straight line until it was out of sight.

Mr. Henri remained home until 5:00. .pm when his wife arrived back from work. After telling her of the sighting, the pair would travel the short distance to the police building to report the incident. While the police would treat their report seriously, it was perhaps the presence of plants and ample vegetation in the garden that would cause them to take samples away for investigation. These samples would most prominently be of Amaranths flowers.

It was noted upon arrival how private the garden of the Henri’s was. It was, as Mr. Henri had insisted, perfectly feasible that he was the lone witness to the strange craft simply due to how the garden was seemingly walled off on all sides, either by trees, fencing, or the walls of other buildings.

Remember, during this entire time, the object does not make a sound at all and remained completely silent. Even when it shot directly upwards into the bright afternoon sky, not a single noise came from the futuristic machine.