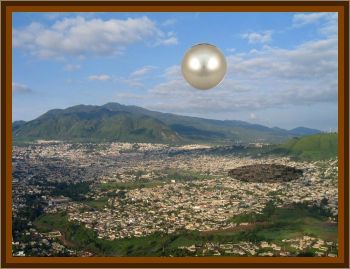 Rubem Hellwig claimed that an object, which looked like a melon or rugby football and about the size of a Volkswagen car, landed at about 5:00 p.m..

He was driving, stopped his car, and walked to the craft. Two men were there with brownish faces and fair hair. One gathered specimens of grass, the other stayed in the machine. They spoke to Hellwig in a language he could not understand and yet, he somehow knew what they wanted, which was where they could get some ammonia. He said he directed them to a nearby town, whereupon the craft glowed, gave off blue and yellow fumes, and vanished silently and instantly.

Hellwig further claimed that he met the same ship the next day, but with a different crew, a tall man with a fair complexion and two women with light brown skin, long black hair, and large, dark, slanted eyes.

They were clad in brown suede like garments, and talked about the natural riches of Brazil, explaining that they were scientists. They also commented on the fact that Hellwig did not run away from them as had others in the past.