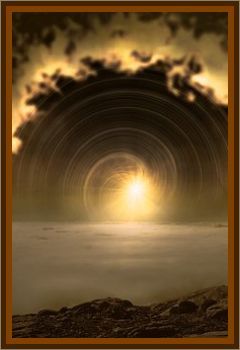 My name is Glenna Heller. This happened two years ago.

I live in an apartment on the Southernmost tip of Kauai. We were no further than perhaps 20' from our apartment, just going home, when out of the west came an enormous ball of light, moving very, very fast. It was opaque white/yellow in the center, with many colors around the peripheries. It appeared to have a tail of light. No sound accompanied the object whatsoever, and it was very low to the ground, perhaps as much as 100' above our heads. As it reached nearly above us, it divided into three balls of light, all the same size and color.

As it moved to the East and away from us, we saw it divide into seven orbs.

I telephoned a friend on the north end of the island and told her to go outside quickly. She described what she saw to me, and it was the same, some seven or so objects of light near the ground.

It appeared to be circling the island.

The following day, our newspaper read:

With a full account of what we had seen, including the fact that a similar occurrence had been viewed on Hawaii's Big Island the night before.

No explanation had been found for that sighting either. It was identical to what we had seen.