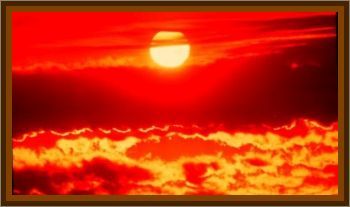 In 2014 pilot JPC Van Heijst and his crew flew a Boeing 747 out of Hong Kong for a long haul flight to Anchorage, Alaska.

Heijst explained how, 5 hours into the 10 hour flight, they spotted an intense flash of light like a lightning bolt, directed vertically up in the distance. This was then followed by a deep red and orange glow 20 minutes later.

But as the crew reached just south of the Russian peninsula Kamchatka they spotted something that they couldn’t explain, nor has it been explained since.

The closer we got, the more intense the glow became, illuminating the clouds and sky below us in a scary orange glow, recalled Van Heijst.

A pilot and his co-pilot have spotted a mysterious orange and red glow over the Pacific Ocean.

And while no explanation has yet been given, it's thought that they may have originated from the explosion of a huge volcano under the surface of the ocean.

And the experience left van Heijst somewhat perturbed, owing to the lack of an explanation for what happened.

Last night over the Pacific Ocean, somewhere South of the Russian peninsula Kamchatka I experienced the creepiest thing so far in my flying career, Van Heijst said.

There were no thunderstorms on their route, or on weather radar, suggesting the lightning did not originate in a storm.

The glow is also a mystery, similar lights have been spotted from squid fishing boats, but van Heijst says this would not make sense in this area.

The closer we got, the more intense the glow became, illuminating the clouds and sky below us in a scary orange glow, in a part of the world where there was supposed to be nothing but water, he continued. The only cause of this red glow that we could think of, was the explosion of a huge volcano just underneath the surface of the ocean, about 30 minutes before we overflew that exact position.

Van Heijst was then nervous of encountering an ash plume in the middle of the night, but fortunately they did not encounter anything of the sort.

Before the flight they had heard via radio about earthquakes in Iceland, Chile and San Francisco. But despite their being a few volcanoes on their route, they had had not been alerted to any new activity, although this doesn't necessarily include unseen underwater volcanoes.

Together with his co-pilot van Heijst says they felt everything but comfortable, while no other aircraft were nearby to confirm the sighting.

We reported our observations to Air Traffic Control and an investigation into what happened in this remote region of the ocean is now started, he added.

Now I'm just hoping that if a new island has been formed there, from the eruption, at least it can be named after me as the official discoverer.

That would be pretty cool.