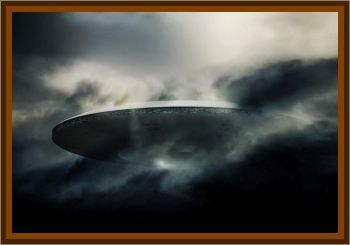 My Mother, her Sister, and I were in a trailer parked along Dr. Smyth's Pasture fence, He was a naturopath, and had his treatmen room in his home.

On a Sunday in July we had gone to Brown's Orchard nearby and got a bushel of pie cherries to can. We had just finished cleaning the fruit and I took the dishpan of waste to throw it out in the barrow pit behind the trailer. I just happened to look down the road about a quarter of a mile and there was this huge, silver saucer shaped vehicle about 200' in the air, just slowly gliding along as if sightseeing, It was going west. It made no noise and the sky was clear of all clouds, I stood there and thought: It cannot be a plane. It cannot be a balloon because if it was, it would be going east as the wind was blowing briskly, as the sparrow nests were being blown out of the locust trees that lined the pasture fence and the adult sparrows were having spasms.

So what is it? I felt almost hypnotized. Finally I shook my body and went to the door and called my relatives to come and see what I see. We watched it for just a minute or so and then it took off like a whiz and was out of sight for a second, then it came back into view about 10 miles away and then in a few more seconds it was gone out of sight, to the west.

Never thought much about it until 2 years later I was in a grocery store in Gooding, ID, and was turning a stand full of Pocket Books, and here was a book: Flying Saucers Are Real. I called to my husband and told him to come there, I said: That's what we saw out from Hazelton.

Yes, I bought the book and still have it stored in my sons shed I hope, at Fairfield, ID where we lived at the time.

I was followed by one in 1976 after dark when I was north of Gooding coming to Twin Falls where I lived by now. It was smaller, and had just a steady red light that I could see. It was about 2 blocks away and very low. It was really about even with me and not over 100' in the air. I stopped my car, after pulling to the sides as I was on a hill road, turned off motor and lights and was going to get out of the car and tha object made a right angle turn and was gone east toward Shoshone and out of sight in a few seconds.

I really am glad it did that, now,after hearing and reading about all the abductions in later years. I have seen strange lights in the sky a couple of times since that cut some funny caper that our planes did not do, but won't go into that.

I know there are alien craft of some kind.

I'm past 82 but I remember those sightings as if it happened yesterday. Of course Mother and Auntie are gone to a better land.