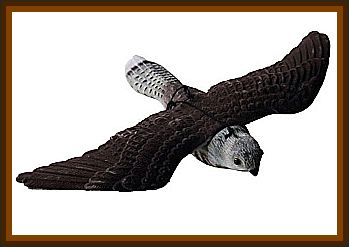 My brother and I were hunting gophers on our family farm.

We happened to look up and saw a hawk hovering directly over us. It was only about 20' above us, and what was unusual, it did not move at all. This is totally unnatural. Normal flight for a hawk flying thermals is to fly in circles.

I fired a one shot from a .22 rifle. The hawk did not move at all. Then we both shot dozens of shots until we were out of ammo.

The hawk did not move except it seemed almost imperceptually higher.

We continued to abserve the hawk until it disapeared from sight directly above us.

This took about an hour. In that hour the hawk did not turn, did not flap it's wings, and did not move in any direction except up.