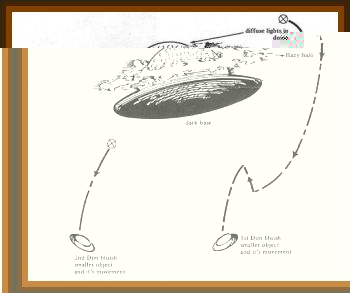 At about 8:15 p.m. Mr. Marty Martinez called and said that he and his son Ricky were watching a strange light in the sky to the southwest and suggested that the Robbins’ take a look at it. The light was flashing red/white/green/yellow/blue and violet in a random sequence and in no particular order.

The colored lights seemed to blend from one color to another rather than blinking off and on and were more diffused than brilliant. Mostly one color was showing at a time and seldom more than 2.

Mr. Martinez, a qualified observer, estimated that the object was 3,000' to 4,500' above the ground. The Martinez family lives about 5 doors away and across the street from the Robbins residence.

Mr. Martinez’ son Ricky, a soldier stationed at Fort Huachuca, was home on leave at the time and was watching it with his father but went into the house and called Davis Monthan Air Force Base and reported the observation and they told him to watch it and report back.

They also told him not to try to chase it as the roads would be blocked.

Mrs. Robbins, determined to view the object more closely, picked up Marty Martinez and his daughter Lupita in her car and they took 1-19 to Valencia Street and on out to Mission Road for a better view.

Incidentally, no roads were blocked off.

The object seemed to remain in the same position, blinking continuously. They stopped at Mission Road, 2 miles from the first position at their homes and found that the object seemed to be only ½ mile away. They noticed that it was now slowly moving west. They got back in the car and drove to Mark Road. A jet interceptor aircraft came overhead and passed to the northeast of the object.

At this point the object began to rise slowly and the lights went out momentarily and then came back on again and then it began to move west faster. They turned off Valencia onto Mark Road and pulled in to Mossman to use a telephone. Marty, who was watching the object through the binoculars could see the object quite clearly and described it as bright and derby hat shaped.

It also seemed to be closer as though they were gaining on it and covered a measurement of ⅝" at arm’s length.

At this point Martinez noticed a smaller point of light below the bright object and a second one to the left and higher than the first. These objects were flat disk shapes of a dim blue color. The brighter derby hat shaped object had the colored lights scattered all over the curved dome surface and they continued to blend in and out in random sequence. The dome was surrounded by a thin haze or halo of some kind about midway of its height. This halo stood away from the surface of the craft and did not touch it but it always maintained its position.

The larger object then began to move in a vertical diamond pattern, then it began to trace a vertical zig zag pattern in the west, retraced the same pattern back to the east, made the diamond pattern again and started all over again repeatedly.

All the while the whole formation was moving westward at over 80 miles per hour as it was drawing away from the witnesses.

The witnesses then got back into the car and came back to Valencia Street and turned west on Valencia and on out to Ryan Field. The object and the smaller points of light continued moving west faster than the car could travel.

The little party stopped at Mrs. Dolly Forren’s home near the road by Ryan Field to get them to witness the object but the Forrens were not at home. However, the 2 teenage daughters were there and they and a couple of neighbors came out to see it. It was still making the same patterns and continued moving west. The right hand lower light rose to the right past the larger object until it was above it. The second one, to the left, remained below but rose closer to the larger object.

The party got back into the car and followed the object further west to Three Points, about 12 or 13 miles beyond Ryan Field and still had it in sight for 8 or 9 minutes as it withdrew from them to the west. They lost sight of it at Sandario.

The total viewing time for this case is 75 minutes and took place in an area which has been a hot bed of UFO reports in the past. At the current writing investigation is being carried out concerning a landed object which was viewed by several people over a period of about 3 hours during which time alleged communication between one of the witnesses and the object is claimed.

This latter sighting took place within just a few miles of where Mrs. Robbins and Mr. Martinez and party were located when they lost sight of the object on May 1lth, and began just 4 hours later.