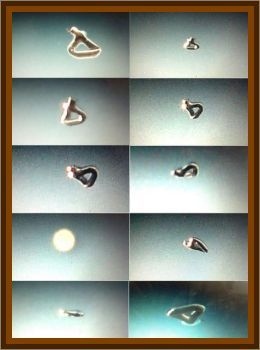 Mr. and Mrs. Bill Hatchett and their daughter Valerie, 9, & a son 4 were driving to their rural residence near Cushing, after having visited with relatives who live between Sand Springs and Tulsa.

It was about 12:20 a.m. when Bill noticed a very bright light south and east of his pickup truck as it travelled west on the country road between State Highways 97 and 33.

He at first thought it must have been an REA pole light at a nearby farmhouse, but the light seemed to be moving with the truck and getting closer. By this time, Mrs. Hatchett was also watching intently and said it appeared to be getting closer to the ground and turning to an intercept course with the pickup.

She began begging her husband to stop the truck, finally complied with her wishes.

The object, which was emitting the light, moved closer and hovered at a point about even with the front of the pickup and just south of the fence row on the south side of the road at an apparent altitude of 150' to 200' above the ground.

The Hatchetts heard or felt, or both, an intense and penetrating low pitched humming sound and a stillness fell roundabout just as one might experience before a storm. The very air seemed charged and oppressive as the gigantic thing hovered there. Mr. Hatchett estimated the size of the object to be equal to the dimension of a Boeing 707 jetliner and he had to shield his eyes with his hand from the blinding white lights which were emitted by the forward part of it. His wife, during this time, had gotten out of the pickup and had walked to the side nearest to where the object was hovering. She walked there by walking around the back of the pickup rather than around the front, because of her fear of the craft.

Mr. Hatchett, very frightened, ordered her back into the pickup. She complied but got out of the pickup two more times and repeated her short journey each time and each time was ordered back into the truck by her husband.

The Hatchetts observed that the object appeared to change shape as it hovered, and neither could determine what, in fact, it really was. The whole object emitted a white light, and the forward section had an intense emission of white light that seemed to revolve from the top to the bottom of the front end. Behind this front area were three belts of lights that appeared to encircle the craft and blinked all the time.

The first belt of these lights from the front were white in color. The other belts probably were also white, but neither could be certain of this because of the intense white light being emitted from the forward section. Behind the object were two red lights toward the top, one white light near the center and two red lights near the bottom.

Although Mr. Hatchett was constantly expressing his desire to drive on and put some distance between them and the object, his wife kept imploring him to remain there. The last time that he ordered his wife back into the pickup he did, however, drive away. As the pickup moved west down the road, the object crossed the road and proceeded off in a northeasterly direction toward the distant lights of Tulsa, increasing altitude as it did so, never getting up very much speed. As it was going away from them, they observed that there were three red lights visible on the back end of the object which were in the form of a triangle and in the center of this triangle was one white light. The way in which the lights on the craft had blinked while it hovered reminded Mrs. Hatchett of the lights on a computer.

During the time that the object was near the pickup, both of the Hatchetts had an intense feeling that the object or its occupants knew everything, and that the power that they or the object possessed was limitless.

Mrs. Hatchett stated that she felt chilled when she was out of the pickup, even though the night was not sufficiently cold to chill her. She further stated that the feeling of being chilled may have been caused by her excitement and other emotions stimulated by beholding such an awesome sight.

Valerie, their 9 year old daughter, was extremely frightened during the encounter. The humming sound the object made and its tremendous size completely overwhelmed her. She expressed the feeling that her brother had been fortunate in that he had remained asleep during the entire episode.

When the Hatchetts arrived at the next town, Drumright, OK, they stopped and reported the incident to a police officer but he did not take the report seriously, which was still fairly typical of the attitude of law enforcement agencies at that time.