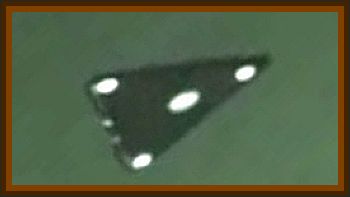 Several residents near Stigler in Haskell County have reported seeing triangle shaped UFOs in September and October of this year.

MUFON state director Marilyn Carlson in Yukon says she talked with the witnesses in both events.

In her report to MUFON on the September incident, Carlson says the unidentified witness told her about spotting an elongated triangle shaped object over a field near Stigler.

She says they checked out the field and found a circular area in the middle of the field, with green grass on outer edge and center has a bare spot.

The lights on the object were white and went down the side of the triangle and it was hovering.

In her report to MUFON on the other incident, Carlson says two witnesses spotted an elongated triangle right above them at about 10:30 p.m. on October 26, 2010.

They told her the object was the size of a city block and blocked out the stars and sky:

It was black with single rotating white lights on each corner of the object.

Marilyn says both witnesses said the object was similar to a drawing MUFON provided.

Robert Sheaffer, says he's skeptical of the reported UFO sightings and says you can't automatically connect the bare spots to the UFOs.

If that were true, then UFOs must have been practically everywhere.

My lawn has some terrible, persistent bare spots. It never occurred to me that this might be from a UFO. I think if you investigate the drainage, soil conditions, etc. for this UFO circle, you'll find a much better explanation there, Sheaffer told TV News in a statement.

MUFON officials say they get about 500 sightings a month with only 20 percent of those being credibles. MUFON says Oklahoma had 12 UFO sighting reports in October 2010.

They say the two Oklahoma sightings in September and October are considered credible.