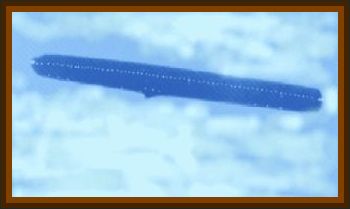 Throughout my life, my father has described an event that dramatically impacted his perception of UFO phenomena.

He has mentioned this story many times. While viewing the ABC special with Peter Jennings on 02/24/2005, at my asking, he elaborated this story in detail.

My father was a college student in Georgia at the time. He was travelling to Greenville, SC on US 29.

This was before I-85 was constructed. He told me that as he approached the Tugaloo River, which is also Lake Hartwell and also flows downstream to become the Savanah River, he came across something strange.

He was driving an MG convertible with the top up, as it was winter time.

Before he crossed the bridge that spanned the river, he noticed a strange object that made him stop his vehicle and watch the event before crossing.

He saw a large cigar shaped object that glided perfectly down river from his left to right. He described the color as a distinct green. I asked him if it was a phosphorous green like older computer monitors and he said that it was like that green, only more of an earthy green.

The object floated perfectly in the same direction.

He said that there was a car coming from the South Carolina side of the river that also stopped to watch the event before crossing. He said that the driver of that car also decided to cross once the object was gone.

My dad said that he looked straight at the face of the driver of the other vehicle as they passed. He described the driver as a white male who had an amazed look on his face.

Both vehicles continued on their way without stopping.

To this day, my dad says that he wishes that he would have stopped and spoken to the other driver.

My dad said that he rolled down the window of his MG while the object was moving in front of him and that the object made absolutely no sound. He said that it seemed to almost absorb sound it was so quiet. His vehicle never lost power throughout the entire event.

This description of events has remained constant throughour the many times that he has told me this. He is older now, yet still very lucid in his description and would be willing to share this with others. He is adamant that the event occured in January or February of 1960. What is interesting is reading the other events concerning a green cigar in the early 1960s.

It is interesting to note that on 2 separate occasions, we have witnesses similar events at the same time over the last 15 years while being about 10 miles from each other.