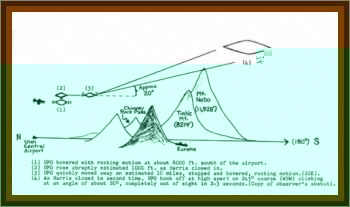 Private pilot Waldo J. Harris, a real estate broker, investigated the object in his light aircraft as 8 to 10 ground personnel at the airport watched.

I was preparing to take off in a Mooney Mark 20A from the North South runway at Utah Central Airport when I noticed a bright spot in the sky over the southern end of the Salt Lake Valley.

I began my take off run without paying much attention to the bright spot as I assumed that it was some aircraft reflecting the sun as it turned. After I was airborne and trimmed for my climb out, I noticed that the bright spot was still about in the same position as before. I still thought it must be the sun reflecting from an airplane, so I made my turn onto my cross wind leg of the traffic pattern, and was about to turn downwind when I noticed that the spot was in the same spot still.

I turned out of the pattern and proceeded toward the spot to get a better look. As I drew nearer, I could see that the object had no wings nor tail, nor any other exterior control surfaces protruding from what appeared to be the fuselage. It seemed to be hovering with a little rocking motion. As it rocked up away from me, I could see that it was a disk shaped object. I would guess the diameter at about 50' to 55', the thickness in the middle at about 8' to 10'. It had the appearance of sand blasted aluminum. I could see no windows or doors or any other openings, nor could I see any landing gear doors, etc., protruding, nor showing.

I believe at the closest point, I was about 2 miles from the object, at the same altitude or a little above the object. It rose abruptly about 1000' above me as I closed in, giving me an excellent view of the underneath side, which was exactly like the upper side as far as I could tell. Then, it went off on a course of about 170° for about 10 miles where it again hovered with that little rocking motion.

I again approached the object, but not so closely this time, when it departed on a course of about 245°, climbing at about 18° to 20° above the horizon. It went completely out of sight in 2 or 3 seconds.

As you know, I can keep our fastest jets in sight for several minutes, so you can see that this object was moving rather rapidly.

As to seeing it again, I was returning to the field after it had departed when I was asked over radio if I still could see the object, and I reported that I could not. They said they had it in sight again. I turned back and saw it at much greater distance only for about a second or two when it completely vanished. The guys on the ground said it went straight up as it finally left, but I didn't see that departure.

On the NICAP report form, Mr. Harris pointed out that the UFO at one time passed below the horizon in front of mountains to the south. This fact rules out any astronomical explanation.