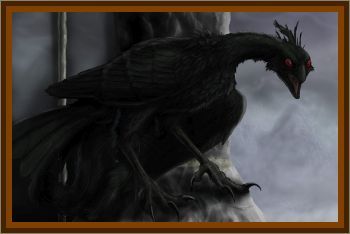 Tracey Lawson, 11, and her cousin Jackie Davies 14, were playing in Tracey’s backyard in an area in the Rio Grande Valley. As they looked out on a plowed field beyond the yard they noticed an unusual object standing some 300' away, near a borrow pit bordering an irrigation canal.

Tracey went inside her house to get field glasses, through which she observed a horrible looking black bird of extraordinary size, over 5' tall. Its wings were folded around its body, and the bird was staring at the girls through large, dark red eyes attached to a gray gorilla like face. Its head was bald, and it had a beak at least 6" long, it made a loud, shrill 'eeee' sound.

The bird or whatever it was lost to view for a few moments, reappearing on the northeast corner of the property, its head poking above a small clump of trees. The girls fled inside and told Tracey’s mother and father, who did not believe them.

But the next day Jackie’s stepfather, Tom Waldon, found strange tracks, three toed & 8" across, and square at the head, pressed an 1½" into the hard ground.

Stan Lawson also noted how oddly the family dog was behaving. It cowered inside the doghouse all day, leaving it only at supper time, when it bolted into the house and had to be dragged out.

That night Lawson thought he heard large wings scraping across the bedroom window, but whatever caused the sound left no trace of its passing.