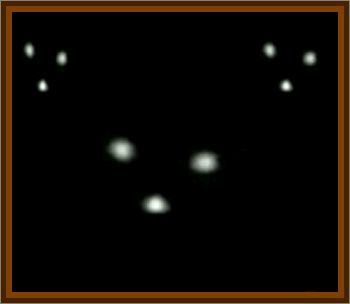 My room mate and I were driving from Hardwick to Woodbury, through Woodbury Gulf. We were on our way to buy some worms and minnows to use for fishing, when we noticed three silver objects flying in formation parallel to us in a southward direction just on the other side of the hills east of us.

As we followed the road which is very curvy we would lose sight of these objects and than see them again as the road changed. We heard nothing other than the sound of our car's engine. When we got to the bait shop in Woodbury, we asked the owner if he had heard or seen anything. He had not.

We returned to Hardwick and asked a variety of people if they had heard or seen anything in the sky. They all scoffed at our story. I have never reported this to anyone except my family and friends primarily as both my friend and I were ashamed to admit that although we were riding in a convertable with the top down and had an 8MM movie camera under the front seat, neither of us remembered to use the camera.

Vermont in those days, and even today is not overflown by many aircraft and to see something in the Vermont sky is an event.