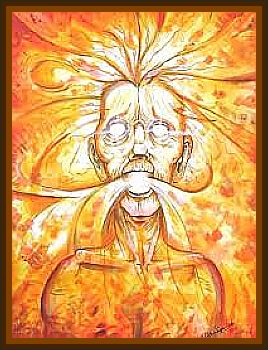 For some time past rumors have been circulated in Hardin to the effect that Diamond Island, in the Mississippi River about two miles from this place, was the home of a ghost. The stories concerning the movements of the alleged spook were, of course, not given any credence at first, but later, when several reputable citizens of Hardin announced that they had positively seen an uncanny looking object moving about on the island at night, the rumors were more seriously considered. Now, after investigation, the mysterious something is no longer considered a myth.

Along toward midnight a peculiar light is seen at the foot of the island. It has the appearance of a huge ball of fire and is about the size and shape of an ordinary barrel.

A few night ago a party of young men from this place determined to visit the island and fathom the mystery, if possible. Equipped with revolvers, knives, shotguns, and clubs, the party secured a boat and were soon cutting through the water at a good speed for a point on the island near where the specter usually made its appearance. Arriving at the landing place, the skiff was hauled up on the shore, and the young men took up a position in a clump of trees close at hand to watch and wait.

Suddenly the whole point of the island was illumined as a bright red object rose apparently from the water and glided up into the air. Ascending probably to a height of 120', the watchers saw the lurid ball fade away.

The investigating party had seen what they wanted. They made a mad rush for the boat, but, just as they reached the place where it had been left, they were horrified to see the little craft moving out on the water from the island. At first its only occupant seemed to be the red ball of fire, but the next moment the watchers saw the crimson object gradually take the form of a man, and they saw him, too, dip the oars at regular intervals and pull a long, steady stroke. The man's features were fully concealed by a wide rimmed slouch hat which was drawn over his face. A peculiar light illumined the boat and the waters around it, making the craft and its mysterious occupant perfectly discernible to the party on the shore, who stood paralyzed with fear, unable to speak or move, their eyes riveted by some mysterious influence they could not resist on the spectral object before them.

The boat was now about in midstream, and suddenly the group of watchers saw the skiff's occupant change again into the crimson ball. Then it slowly began to move upward, and when it was about parallel with the tops of the trees on the island, it disappeared. Next instant the watchers looking across the river saw nothing but the flickering lights in Hardin.

The cries of the crowd on the island awakened a sleeping fisherman on the opposite side of the river, and he kindly pulled across and rescued the ghost-seeking youths.

The fiery spook, it is said, still makes its nightly trips to Diamond Island, but no more investigating parties have ventured across to solve the mystery.

It is said that some years ago a foul murder was committed on this island, and by the superstitious, the crimson object is believed to be the restless spirit of the slain man.

Rogers remains convinced that what he saw was not routine. It looked like a shooting star with no trailing mist, I've never seen anything like it.