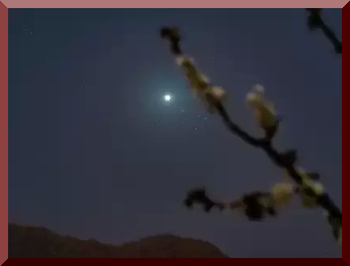 We were laying on our backs, middle of the road, looking to the western sky for shooting stars. Venus, I found out later, was about 30° off the horizon. There was this light coming from north to south at a steady speed and a very straight line. It did not leave a trail or anything of that sort. It went straight to Venus and stopped. It stayed there for two or three seconds. It then went around the lower part of Venus to the other side, 180° from the first stop. It was there two or three seconds, then continured on a southerly line.

Then my father called me in.