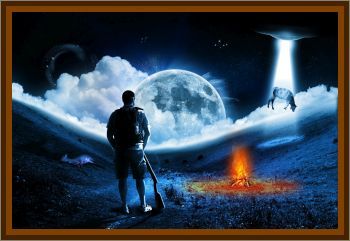 28 year old Myrna Hansen & her 6 year old son saw five UFOs descend into a cow pasture as they were driving home near Cimarron on May 5. Afterwards she had a period of missing time of 4 hours, and confused memories of an abduction. She later was regressed on May 11 & June 3.

According to her account, while under hypnosis, two figures in white suits emerged from one of the UFOs and mutilated one of the cows in the field, while still alive, with an 18" knife. She & her son were captured and taken to separate ships. She resisted but was undressed and given a physical examination. The exam was interrupted by a tall human who apologized and ordered the aliens punished. He then took Hansen on a tour of this and possibly other craft. The last UFO took flight as she was next lead into a landscape that she believed was west of Las Cruces and another near Roswell. She was then taken into an underground base where she managed to escape briefly. She found herself in a room full of what appeared to be tanks and discovered human body parts floating in them.

Hansen was dragged out of that area and she and her son were put through a painful process involving loud noises and blinding lights before they were taken back aboard the UFO & flown, with her car aboard too, back to the site of the abduction.