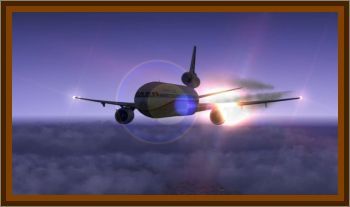 On a clear dark night, flying from Hanover through the Air Corridor to Berlin at 8,500', we sighted a light approaching us from the South.

We were a crew of three professional airline pilots, with a cumlative flying experience of 50 years. As the object drew closer the approach speed slowed and it flew along beside us. It showed three lights at the top and four at the bottom in a trapezoid shape, with a trailing colored glow at the rear. It changed altitude, up and down, as it flew beside us.

A query to air traffic Control (USAF) resulted in no radar contact in the area. As we descended to 6,500' the object descended with us in formation. Upon approaching the bright lights of the city of Berlin, the object fled South at an incredible rate of speed.

After landing we found some other pilots who had witnessed a similar object, while flying into Berlin through the south air corridor, streaking south and climbing, at about the time it left us.

All agreed it was definitely under control and had better performance than any aircraft we'd ever encountered before.