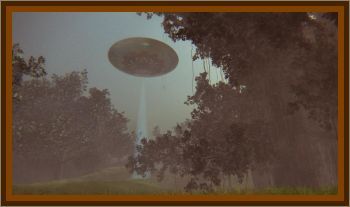 The object was first noticed by two airmen walking across the ramp at Haneda AFB on the night of August 5, 1952 at 11:30 p.m. local time. The airmen were on their way to the tower to relieve the operators.

On reporting to the tower, the object was called to the attention of the tower operators who were going off duty.

The 4 operators agreed that the object,which they observed for from 50 minutes to an hour through 7x50 binoculars, was circular in shape and with constant brilliance. The light appeared to be a portion of a large, round, dark shape which was about four times the diameter of the light. When the object was close enough for details to be seen, a smaller, less brilliant light could be seen along the lower edge of the dark shape. The object faded to the east twice but reappeared, it could have faded or actually gone away and come back. The size of the light,when closest to the tower, was approximately the same as the ceiling balloons that are released near the tower. A comparison was made to these 24" diameter balloons at 2000'. This would make the object 50' in diameter at 10 miles.

During the observation, a lighted balloon was released but this light was extremely dim and yellow compared to the object.

An airborne C-54 was requested to check the object, which the pilot did, but he reported seeing only a star.

An Aircraft Control & Warning unit was notified soon after the original visual sighting and shortly after 11:45 p.m. picked up an unidentified return. The object was tracked at varying speeds from hovering to 345 MPH. At 12:12 a.m. the return broke into three pieces, and they maintained intervals of ¼ mile. No visual observation was made from the AC&W unit although it was attempted and, at one time, the object was within 10 miles of the station. The radar was directed onto the target by visual observations from the tower, so it can safely be assumed that both visual and radar contacts involved the same object.

At 12:03 a.m. an F-94 was airborne on a scramble and was requested to search to the NE of Haneda AFB over Tokyo Bay. They could make no visual observations, but could see the North Star and Venus. The F~94 was vectored to the object by Ground Control Intercept, both the F-94 and object were on the scope, and held for 90 seconds. Shortly after this, both the object and the F-94 disappeared into the ground clutter on the GCI. At no time did the F-94 make visual contact. The radar contact indicated the target was at 3.4 miles, 10° below and 10-degrees° to the right of a 320° bearing from the station.

Soon after loss of radar contact, the object was lost visually.

The F-94 crew reported excellent visibility, yet they could not visually observe the object during a thorough search of the area. They stated that the moon was bright and might possibly have caused reflections off the few scattered clouds. This, however, is not in agreement with the description of an exceptionally bright light given by the tower operators.

Since the weather was not given, it is not possible to determine whether the radar return was caused by some type of anomalous propagation.