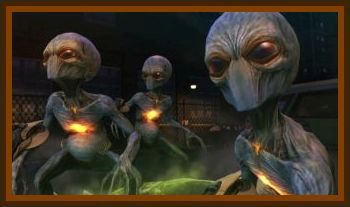 3 men were working in the night shift on a small observation post on top of a small hill, with a good view over South Evoikus Gulf. They were looking out for forest fires. They had parked their vehicle next to an old abandoned heliodrome with a tattered landing platform made of concrete.

The witnesses were sitting at a nearby kiosk when suddenly a disk shaped light colored object was seen coming towards them flying low and soundless from a northeast direction. Their mobile phones, radio and the vehicle CB ceased to function all at the same time.

When the UFO approached them it was emitting a light sound like a small electrical motor. The sound was not heard after the UFO landed or during the rest of the incident.

The UFO approached and landed softly on the old concrete platform about 50' away. It was shaped like 2 plates stuck together on their lids was about 10' in diameter and seemed to have a whitish or metallic color. It seemed to land on its belly and not on landing gears. It was partly hidden by small bushes.

After a short while the frightened witnesses watched a door open on the side of the UFO. The opened door formed a ramp leading to the ground. Inside the opening a dim light was observed. After that, 3 small occupants emerged from the inside one after the other. They were humanoids , about 3' tall, with normal bodies and limbs, resembling small kids.

The beings were wearing tight fitting and seemingly metallic uniforms or suits, like the ones used in scuba diving ending in a hood that was covering the head but not the face. The witnesses could not see their faces in the dark, but apparently the humanoids were not wearing a visor, or faceplate. The humanoids preceded one after the other for about 20' until they reached the end of the flat area on the top of the hill. They seemed to walk a little bit faster then the normal. Then they seemed to descend on a small path that leads to the seaside and vanish from view.

Meanwhile the opening on the UFO remained opened. One of the witnesses attempted to walk towards the UFO but thought better of it. After about 10 minutes the humanoids appeared again on the path and preceded, again, one after the other to enter the UFO. The door closed and the UFO took off softly and silently.

It vanished from view southward. The witnesses searched for traces but could not find any.