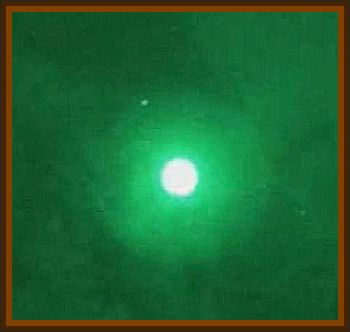 The main witness, involved in 2 other encounters, so far, was driving the family car along the Hammonds Plains road, it had been a very long day and the witness was feeling kind of depressed, driving around with no direction or intended destination because being on the road made the witness feel more relaxed.

Approaching the Lucasville Road the witness noticed a flickering light in the sky. The immediate natural assumption was that it was an airplane approaching Halifax International Airport, that is until it completely stopped dead and literally fell from the sky, coming to rest just on the treetops behind the Woodhaven campground and Hammonds Plains Pizza.

The witness was overwhelmed by a flow of emotion, curiosity and awe, just like on the first experience.

The witness was almost rear ended by another motorist driving behind when she stopped. She doesn’t know if the occupant of that vehicle witnessed the object or not, because they just continued driving down the road. Again she got out of the car for a closer look and nearly lost consciousness when she actually recognized what it was.

It was, maybe not the very same, but an identical object to the lone she had spotted and followed a year before. Same flat X shape and dome like topside, same tail, and the same pulsing light on the underside, in the center of the X. Instantaneously in her mind all the events were connected by the feeling and emotion as well as psychological awareness of knowing you’re being observed, and that what you are watching knows your looking at it, again as soon as it all clicked in her mind the object accelerated away, down the Hammonds Plains Road, towards Bedford.

Again she tried to follow, this time she pushed it a little further and exceeded 100 mph on a double lane. To her surprise the object took a nearly identical route away from her. When they hit Bedford, she turned onto the highway hoping for a better view.

By this time it was well ahead of her, traveling parallel to highway 102, towards Truro. Finally near the airport the object just shot straight up in the air and disappeared in less than a second. The witness stopped the car and began throwing up on the side of the highway, completely confused but yet certain of what she had seen and just like in her first encounter, she has a blank space in her memory of any event between being on the side of the highway and waking up the next morning.

According to the witness the pulsing light on the underside of the object coincided flawlessly with its physical movements.

It was brighter under directional movement and got brighter more so as speed increased. Also it was able to pivot from side to side in a hovering position, in the same fashion a person would turn their head from side to side. Most importantly its transitions from a hovering position to a direction of travel were transitionless. It was as if it moved without resistance, and it seemed like there wasn’t actually an acceleration process. It was like it jumped to a predetermined speed instantly.

The witness believes she was contacted in all of her experiences by the same or similar beings. In every experience she could feel something inhuman in the very core of her soul and in every corner of her mind and body.