Was That a UFO Over Your House? 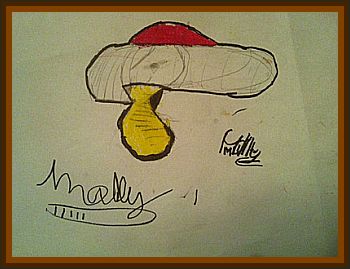 The above is a picture drawn by Molly Mitchison, 11, of what she believes she saw.

What were those strange lights over Simon Reynolds’ home? Were they UFOs?

Reynolds and a few of his young neighbors believe so.

The sighting occurred Saturday, July 16 at about 9:00 p.m. The lights were noticed by 3 girls, Christina Crow, 9, and Molly Mitchison and Emily Wass, both 11, playing on Roseland Avenue, a small dead end street off Blake Street near Gage Park.

We were riding our bikes around the street and, like, doing nothing, recalled Molly, who is going into Grade 5 at Adelaide Hoodless Elementary School. One of her friends pointed into the sky at something above Reynolds’ house.

I figured it was nothing, but she said it looks like a spaceship, said Molly. I thought she was crazy or something, but then it came really close. It was, like red, but it had yellow lights all over it. It made no noise at all. It was completely quiet. It was, like, hovering.

They counted 3 objects and ran to get Reynolds, 42, and his wife Rose, 48. Reynolds filmed the objects on his iPhone and in that footage, he and the girls can be heard expressing their amazement. Reynolds can also be heard hollering to the neighborhood:

He estimates the objects, which he described as red fireballs, were a few hundred feet in the air and travelling north across the sky.

They are not alone in seeing the objects. Bob Schofield, 70, was at a dinner party on St. Clair Boulevard the same evening, and at about the same time, when he and his friends saw 3 yellowy/orange lights in the sky.

The following Saturday, July 23, at about 9:30 p.m. Scott Watson, 35, estimates he was one of about 30 people at a back yard barbecue who saw 4 glowing orange lights moving across the sky above Cochrane Road. He also videoed the sight, and posted it on YouTube.

Everybody was abuzz, said Watson, a government worker. All 4 of them didn’t make a peep. It was the craziest thing we’d ever seen.

Schofield, owner of Canadian Safe on Chatham Street, first thought the lights were linked to a fireworks display. But, he said, they moved in sync and made no sounds. Both Watson and Schofield said planes flew over later and there was a clear difference between them and the glowing objects.

I don’t believe in UFOs or any of that, but I am puzzled, said Schofield. I don’t have any explanation on what it was.

The authorities don’t have any ideas, either. Jonathan Bagg of NavCanada, which operates the control tower at the John C. Munro Hamilton International Airport, says it was a regular Saturday night for air traffic over the region.

There were no reports of anything unusual, said Bagg.

Reynolds, an actor who has appeared in productions during a 30 year career as varied as Flash of Genius and Saw IV to Traders, Street Legal and Flashpoint, can’t fathom that the lights were man made.

There’s no way these were planes or anything mechanical, unless there’s completely silent helicopters he says. It was like a red/orange.

The whole casing of the ship was the light. This wasn’t a projection in the sky. This was an actual solid thing. They were like suns.

He was so intrigued, he jumped into his car with his wife and the 3 girls and tried to follow the lights north to Lake Ontario, but could not see anything once they reached the QEW.

Every time I go out, I look up in the sky Reynolds said. I can’t help it.