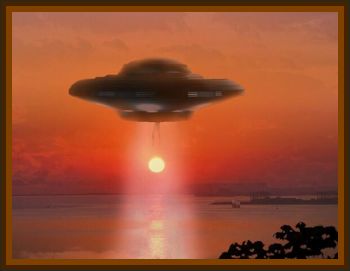 I was driving south on the highway from Victor, MT to Hamilton, MT. Sitting next to me was my girlfriend, and in the passenger seat was her mother.

Look at the saucers.

The distance between the highway and the Bitterroot Mountains to the West was approximately 1½ miles. The 3 red/orange ovals, which were lit from within like japanese lanterns, were between us and the mountains. I would guess their distance at about ½ mile from the higway we were traveling on. I would estimate their size to be 150' 0r 200' in length. The trio paced us at 70 mph.

Just north of Hamilton is a deep canyou into the Bitteroots. The trio turned as one aircraft and entered the canyon, displaying their thickened saucer shape.

The above incident is only one of several events seen by residents of Missoula and the bitterroot valley during the Summer of 1964. Check the Sunday supplement of the Missoulian, the local paper. It contained a report about a family that saw saucers landing nightly in the pastures around their ranchouse in Rattlesnake canyon North of Missoula.