Door At The End Of The Hall 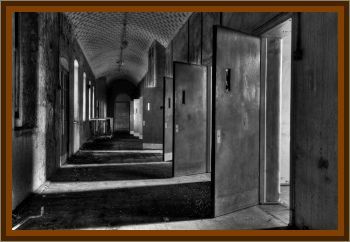 Myself and a buddy on my squad responded to an alarm. The incident location was an old office type building that had been converted to doctor's offices. There was a pharmacy attached to it. Our dispatch received a motion signal from an upstairs office. Key holder arrives on scene and we go in to secure the building. The stairs were locked behind a door that, of course, the key holder didn't have keys to, so we took the elevator up to the second floor.

Elevator opens to a pitch black hallway, except for one overhead light at the end of the hall. We start checking doors, and so far all are secured. We get to the last office, and sure enough, the door is unlocked. We make entry and observe it to be an unused office. The door opened to a sizable waiting room and reception area. There were about 10 or 12 examination rooms, all cleared with no hiccups.

We exit the office and immediately, something seems off. That is when I realize the overhead light at our end of the hallway that had been on was now off, replaced by another light over by the elevators. I look at my squad mate and he is completely white. I ask him what is wrong and he says:

Weren't all those doors we just checked closed and locked?

Sure enough, all the offices down the hallway we had just checked were now standing open. Pucker factor sinks in at this point.

So we start clearing offices and securing offices. We finish the last office, and on our way out, just before we turn the corner to get into the waiting area, the main door just slams shut. Then, our radios start going nuts with some kind of static feedback. Now I just want to get the hell out of there.

I call dispatch and she tells me that there is no way we were out with a key holder. She states that the alarm company had only just made contact with one. Eventually, the real key holder arrives on scene and I ask her about the man that had let us in the building, the first key holder. She asked me to describe him, so I did. She states that that sounds like one of the doctors that used to lease the office on the second floor at the end of the hall.

She then states that he had committed suicide at his summer home several days ago.

I still won't go back there.