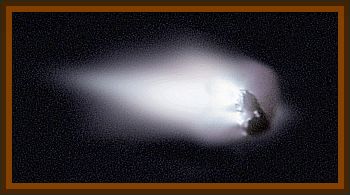 His first experience was in March of 1676, when he saw, as he said:

A vast body apparently bigger than the moon.

He estimated it at 40 miles above him. He also stated that it made a noise, like the rattling of a great cart over stones.

After estimating the distance it traveled in a matter of minutes, he came to the conclusion that it moved at a speed greater than 9,600 mph.