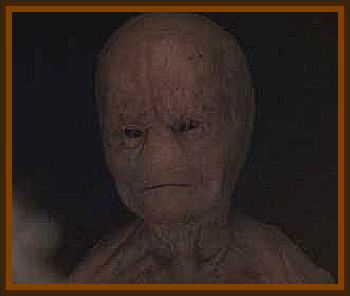 In 1995, Australian UFOlogist Keith Basterfield interviewed a woman whose anonymity he preserved.

She told him that in 1951, she was a young married woman, whose baby had recently died. Her husband was a retired policeman, and they owned a 3500 acre property, north of Murray Bridge, Halidon, South Australia.

Early one morning that year as her husband was away from the farm at the time, she was out with her dog rounding up cattle. She walked up a sand dune to overlook the surrounding countryside for the cattle.

Upon reaching the top of the dune, she observed an unusual object, resting on the ground on four legs, of the size of a two bedroom house. She watched for a few moments, and decided to walk towards the object. As she did, three figures appeared from a door underneath the object. The figures floated down to the ground.

The entities were described as male, of normal height, adult human looking beings. Their facial features were normal human ones with very clear blue eyes. Their skin seemed of a delicate nature, smooth, with no wrinkles.

They were clad in tight fitting silver colored suits, with matching boots and a hood over their heads.

She willingly entered into the craft, floating up in to it, as if riding an invisible lift.

Inside there was a being standing at what today, would be called a computer console. The being was moving the hands over the panel, without touching it, yet lights flickered on and off as if in response to the movements.

She also noted a screen like a TV in the room. She said she was not scared and felt comfortable in the presence of those men.

A conversation with them ensued verbally in English, though she had the feeling they could also use telepathy:

At the beginning of the visitation, they talked without talking. She had little recollection in 1995 of the content of the conversation.

She said the beings knew that she had recently lost a child, and reassured her that things would be fine. She did not know how they could know this.

Eventually she came out of the object by floating to the ground.

A round circle was found on the ground where each leg of the object had touched it. She tried to talk to people about her experience, but people just scoffed.