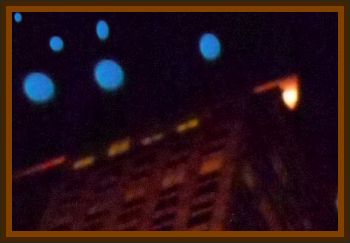 One evening in mid October of 1978, while I was staying at a friend’s beach shack at Haena, Kauai, I was outdoors enjoying the calm, mild weather surrounded by a group of perhaps 15 to 20 tourists, campers and local hippie types.

Half a dozen or so bright blue lights appeared out over the ocean, perhaps ⅛ of a mile off shore.

When I pointed them out, each person stopped to watch in amazement.

The lights were orb like in shape and appeared relatively small from that distance, and they seemed to be dancing with one another like fireflies. They swirled about each other at a constant speed, similar to the way summer gnats do.

Though it was a dark night, we could see the lights moving in and out of an overhead cloud that was heavy enough to obscure them when they flew into it. They continued to move in and out of the cloud, randomly swirling about. They made no sound whatsoever.

This phenomenon simply astounded me, and I ran along the shore telling everyone:

Look. Do you see those lights? What are they?

Nobody had an answer. They just froze in place and kept watching. When I finally asked an older Hawaiian man these questions, he said, calmly:

Oh, those are just the fishermen’s lights.

I asked what he meant, and said that the lights were up in the air and not coming from any boats. He said:

We've seen these lights for many, many years here, and we just call them the fishermen’s lights.

After about 5 minutes, the lights faded from view.

I stayed up very late watching the skies, but I never saw them again.

During that last week of my stay on Kauai, I kept asking everyone I met if they had ever seen these lights. Few had. But several older hippies who lived way back in Kalalau Valley said the Air Force was constantly chasing things out over the ocean in that direction, and that they’d heard plenty of rumors about UFO sightings, especially over the ocean between Kauai and Ni’ihau.

I’m almost 60 years old and I remain haunted by this experience, which has never been explained to my satisfaction.

I came to this website looking for any description of a similar occurrence, but found none. Puna area on the Big Island of Hawaii was also known for a rash of UFO sightings by Japanese anthurium farmers during the mid 1970s, and there had been several newspaper articles on that topic when I first moved there in 1977.

I was told by the late Dr. Graham Odgers, Canadian head of the Canada-France-Hawaii telescope project, that a famous international UFO committee, of which he was a long time member, held its annual meeting in Hakalau on Big Island in 1979.

I remain convinced that something serious and quite mysterious has been going on out there for a very long time.