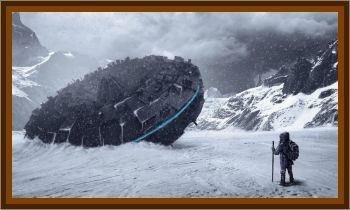 On January 29, 1986 something of very strange happened in Dalnegorsk, Primorsky Krai region, former USSR. Dalnegorsk's inhabitants noticed a reddish ball flying parallel to the ground, emitting no sounds, which size was about 'the half of the Moon's disk', Its speed was approximately 34 mph and it was hovering about 2500' above the ground.

Eye witnesses described the fall in different ways. someone claimed that the ball fell down emitting a flash, others claimed that it kept hovering over the Hill for a while, performing slow ascending and descending manoeuvres.

Three days after the sighting, Valery Dvuzhilny, Head of the Far Eastern Committee for Anomalous Phenomena, climbed the hill with a grup of volunteers. They discovered a landing ground of 6'6" x 6'6", and the appearence of the ground was like affected by very high temperatures: remnants of silica rocks were found splintered due to exposure to high temperatures and 'smoky' looking.

The objects collected at the site were later dubbed as 'tiny nets', 'mesh', 'little balls', 'lead balls', and 'glass pieces', that is what each resembled. Black glass-like drops and mesh particles, like tiny nets, were also found. Totally, 70g of lead, 5g of mesh particles and 40g of black glass like drops were found on the site.

The Height 611 incident, So named because that was the elevation of the incident, was observed by a large amount of people. Policemen, firefighters, journalists, doctors, teachers, Protection Ministry of Internal Affairs officers, a group of schoolchildren.

One of the most interesting eyewitness was Vladimir Kondakova. he was on the bus when the ball flew over his head near Hight 611. The object was already flying low. According to what the witness reported, it was round, without any projections and was metallic in color and slightly reminiscent of the hot stainless steel.

He thought that it was some military projectile launched, he did not heard any noises. He also reported to not have heard any noise at the moment of the crash.

Witnesses described in some different ways what happened after the fall of the object. Some pointed out that it fell to the ground and never re-appeared, while others, including the group of schoolgirls who were at the stadium 'Stroitel', reported that the object slowly rose and fell 6 times, for around half an hour, while rising was bright, while falling its luminous intensity was weak. In 1988, using proton magnetometer, 6 magnetic spots' were found on the site.

According to Ministry of Internal Affairs officers, fire at the site continued until deep night, although it was a flat floor and, except for a small stump, there was nothing to burn. The trajectory of the object's flight was from south west, from the Chinese border, and did not correspond to launches from the Baikonur launch site.

When Dvuzhilny climbed the hill, the snow was up to a depth of 22", the climb extremely difficult. The crash site was found quickly, there was no snow on it at all. It was densely covered by siliceous shales, its appearance was pointing to recent events. There was a strong smell of something chemical, it recalled the smell of some products used for the wood. The The crash occurred in a point characterized by elevated magnetic anomalies, up to 200 nT, which is under Mount Izvestkovoy. The anomalies in the crash site were formed with gravitational fields, electrostatic and magnetic components, the main vectors of which were directed vertically upwards: the anomalies in the area have adverse effects on radio electronic equipment, and on the human body. Head-aches, increase blood pressure, sensor failure, loss of coordination and more issues.

A thorough inspection of radioactivity at most places and on different samples returned that all values were no higher than natural background ( alpha, beta, gamma, fast and slow neutrons ). During the time after the crash, all the surroundings were carefully examined, but nothing relevant was found.

A chemical analysis of the drops showed they were mostly composed of lead, silicon, and iron. Some of the drops contained significant amounts of zinc, bismuth, and rare earth elements. An analysis of the soil, rocks, and burnt wood taken from the landing ground was also performed.

It was noted that the chemical composition was similar to the composition of similar samples taken from the site of the Tunguska event. The mesh particles were also analyzed. The material of which the particles were composed did not dissolve in potent acids and organic solvents even when exposed to high temperatures for prolonged periods of time. It was discovered that one of the mesh particles was composed of scandium, gold, lanthanum, sodium, and samarium. A different analysis of another mesh particle showed gold, silver, and nickel, but after that particle was heated in a vacuum, the analysis no longer showed these elements; however, molybdenum and rhenium were detected.

Some plants were buried internally, with no external traces of darkening. The depth of destruction is up to 60%-70%, with destruction of cellular structures thta was detected with the microscope: in according to AP Kulikova, of Institute of Chemistry FEB USSR Academy of Sciences, it was determined by ultrahigh temperatures.

Totally, were found scattered across the site a little more than 30g. of glass like drops. They ranged from .15". Weight of up to 80 mgr largest conglomerate, consisting of 4 sintered, weighing 850 mgr.

The first attempts to drill them in order to analyze them with a spectral analysis tool had no success. It was impossible to drill even with a diamond tool, their strength was incredibly high.

At the Japanese microanalyzer one of them resulted to contain: cobalt - 0.49% silicon dioxide - 3% tungsten - 2.4% Not found chromium, nickel, manganese, which are usually for the production of any marks of steel.

Under the metallographic microscope at this shlife iron on the structure resembled iron, but the results obtained in another microanalyzer showed that the metal composition was magnesium, iron, nickel, lanthanum, Praseodymium, neodim, caesium. And lanthanum content was up to 16%, praseodymium to 11%, cesium to 57%, neodymium to 18%, and iron and nickel basis and were not found but in very small quantities.

The mesh found in the area had an extremely complex appearance, reminiscent of braided mesh. It, like other materials, lead, alloys, was found only at the crash site, and is the most mysterious of them.

It is flat with a lot of openings and jumpers. It had a number of interesting properties. Not soluble in strong organic solvents and acids, such as nitric, sulfuric, fluorspar.

Atomic absorption analysis has identified 11 metals: zinc, cobalt, copper, iron, manganese,silicon, calcium and large quantities of potassium and sodium. In the presence of oxygen from the air burns at a temperature of the persistence of forms about 1000°, but in a vacuum withstands up to 2000°. Checking on superconductivity is negative, but at 120° K, in liquid nitrogen supermagnitnye has properties similar to meteorites glazing.

At the same time behaves in a normal room conditions as the dielectric, with little up, as semiconductor, and when up in a vacuum as the conductor of electric current. One of the samples was subjected to radiation exposure on atomic reactor in Tashkent and analyze neutron activation method.

X-ray and a number of other analyses revealed the existence of organic substances aliphatic and aromatic type, which means some affiliation on its origin from the stump. In 1988, at the X-ray alalize, until up in a vacuum were clearly peaks of gold, silver, nickel and reainiya.

Following up in a vacuum R - 5-10 mm r.st. and temperature - 1500° at rentgenogramme missing peaks of gold, silver and nickel, but there were peaks of alpha-titanium, molybdenum.

Soak made on coltan substrate and these elements in a vacuum chamber was not. So far, remains a mystery:

how disappeared gold, silver, nickel and molybdenum and emerged alpha-titanium and rhenium?

The group of study, hunted high and low every possible evidence of fallen debris. But it was clear very soon that nothing anomalous was there but the landing ground: actually, the are was covered by snow, it would have been very easy to spot even the smallest objetc, while the snow surface was unbroken except for the landing ground.

During the last 20 years, Valery Dvuzhilny carefully gathered, classified, made a description of objects, photographs, physical and chemical analysis. He repeated several times some of the analysis in order to keep the results up to date.

Valery Dvuzhilny, who's a biologist, had a serious approach to this case, and he's always been available to share the documentation, including analysis results, with other researchers and scientists.

Many possible explanations have been provided to the incident so far. A stage of a Soviet missiles launched from Baikonur, a crashed top secret military aircraft, a secret Japanese satellite, and so on.

The launch from Baikonur could be rule straight out, since nothing was launched the day of the incident. After more recent analysis on the Height 611 samples, scientists have identified a 'super hard, high temperature resistant alloy manufactured artificially with some special technology: it's difficult to imagine a possible way to get this kind of structure, its designation, physical composition and other properties.

The Committee on meteorites from Moscow, ruled out the meteorite hypotesis twenty years ago, after analyzing the samples and wintnesses.

Ball lightning has always been rare for the province and were never recorded the last 10 years before the crash.

The white strips are quartz threads: some of them were only 17 micron in diameter, and were made of more thin threads.

Sample black vitreous substance after vacuum melting. The form does not match the original. Dimensions also changed from the original, about 1.5 times.

A falling spy satellite was also ruled out, not just for the absence of wreckage, but also for the presence of carbide alloy hafnium and tantalum, rare minerals and metals, metal alloys. Besides, it's flight path was parallel to the ground.

The question, of course is 'what crashed on Height 611'?

The findings of scientists and specialists suggest that the object had a 'solid metal case'. It was produced artificially by special technology,nobody has been able to find on Earth any analogue alloy. In the fall and the impact on the rock 'a metal ball without holes and stainless steel color' destroyed releasing just the samples that Dvuzhilny and his staff were able to recover.

Another interesting detail is that eyewitnesses claimed that the ball for half an hour has made six attempts to takeoff. At the hill top six spots were found magnetized: and the were silica rocks: silica is a nonmagnetic material.

Over the years, a great variety of analyses up to the spectral and laser isotope microprobe - at the Russian, and at the Japanese, and French equipment. Apply methods and computers processed the information received. The research was carried out in various scientific research institutes in Russia, England, New Zealand, mathematical calculations of harmonics Captain Kathy Bruce.

The crash at Height 611 is one of the most interesting cases of CE-2: the researcher has always been available to share what was found to the site for analyses: and analyses suggest that despite what has been found suggest in many ways to have been created by some advanced technology, at the status quo, in according to all the scientists who conducted analyses on the samples, no terrestrial technology is known to be able to produce the same results.

Russian newspaper Komsomolskaya Pravda, NOT english Pravda, in its December 1, 2000 issue published an article about the Dalnegorsk case, NLO svili v Primorje gnezdo. I find this very interesting: in the early 1990s , according to the newspaper, Russian generals from the anti-aircraft forces became concerned about the UFO activity in the area, and contacted local UFO researchers. An exchange of information ensued.

It is newsworthy when a major Russian newspaper mentions such fact (the author actually quoted Valery Dvuzhilni, the chief investigator of the Height 611 UFO crash).