Contacted By A Grey 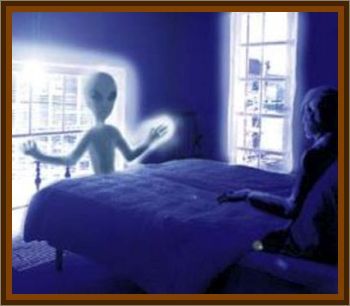 Now, as to why I was there since I am from Indiana, My mother and father and I were living out of a car since my dad did not have a job and we lived basically out of a car. We were somewhat like gypsy's and mom and dad would get work with carnivals. TV was almost non existant, since we had no home most of the time. Now, I mentioned this because I was not influenced by any TV program that might have made me dream what happened to me. I am entirely serious about what happened to me. Make no mistake about it. It has perplexed me for years, and only recently I found out that there are places like this to report things of this nature. I think this might intriuge you as what was said to me by my mother only about three years ago, She told me that at the age of nine or ten she was abducted, and taken up into a ship that had no corners in it. This is important since mom had no way of knowing that reports given by other abductee's reported the same thing. I almost fell out of my chair when she related her experience to me. I never knew about it till three years ago. I was telling her of my experience, and that is when it came into the conversation about mom.

Now, my experience, as I call it.

My Grandmother and Grandfather had to come to KY to retreive me since my mom and dad were about to go away to prison for an extended period of time. They brought a travel trailer with them for us to stay in till the end of mom and dad's trial. This, is where the contact came to me.

Grandma had made a pallet on the floor beside their bed in the back of the trailer. I was sleeping and awoke abruptly and had the distinct feeling before opening my eyes something was looking at me, and, it was standing over me, it was an odd looking creature, thin in nature with an oval looking head with large dark eyes.

When it saw that I was aware of it being there, it raised up straight, turned to the right and in a jerky strobe light looking way, turned to the hallway, and about half the way down the hall simply vanished into what I call thin air, or disapeared or whatever you want to call it.

I remember this event as if it was yesterday, and can remember every aspect of it. I have had other instances in my life and in one instanse even had a wittness to it that scared the crap out of him so much so he ran into the house because things outside during this event was not right.

That would be another story another time.

I am a Nam Vet and also had experiences with that too. As if I was being informed of danger ahead of time. I was a pointman with the 173rd Airborne Brigade. This is important to me to know there are other's out here that know of there existence, and know what I have gone through all these years. This is no joke. And, I do not take lightly, anyone taking what I relate to them lightly either. I want answers and I will do whatever it take s to find out the why.