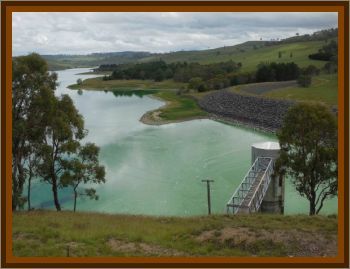 An Unidentified flying object slammed into a dam in the small town of Guyra NSW. It is believed that the object hit the dam between Monday December 6th and midday, Wednesday December 8th.

The object flattened the reeds in an area approximately 50' long by 18' wide which was discovered by a local council employee.

Theories ran wild about what the object could have been from a UFO, space junk, a meteorite, a NASA probe back from Mars, frozen sewage or simply a hoax. The water supply was cut off to stop possible contamination as the dam is the towns only drinking water source.

According to researchers the object had a 45° angle of entry, no-one in the town heard a sonic boom or explosion, the surface had burn marks, reeds were flattened but not broken, mud was splashed around the area and the object may have even skipped on the water before entering the dam.

On Thursday, December 9, 1999, divers entered the lake behind the Guyra dam to test for toxins or radioactive material.

On Friday, December 10, 1999, Police divers finished their work in Guyra Dam. The divers recovered sediment and fragments believed to be from the object. The sediments were tested by geologists on-site and the geologists have advised police they believe sediment was from a small meteorite the size of a golf ball.

The meteorite apparently penetrated the mud at the bottom of the dam and is now embedded about 12' into soft granite and is unable to be moved.

Australian UFO Research Network is not convinced Totally forgotten are the original witness reports of a large object and the mysterious 120-square-foot gouge in the reed beds.

Also forgotten is the reports of burn marks something not normally associated with meteorite impacts could there have been a cover up of a deeper secret at Guyra Dam? We may never know.