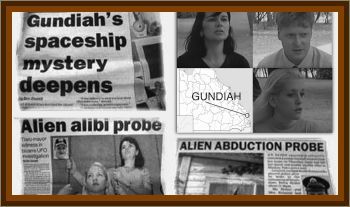 Keith Rylance explained that he had gone to sleep in the trailer bedroom at about 9:30 p.m. Petra retired to her bedroom trailer annex. Amy, his wife stayed on a couch watching TV in the lounge room. Each of these locations were in close proximity, separated by a window and wall respectively from the lounge room. Petras room had a door leading to the lounge room, which was left ajar. The door to the bedroom, where Keith was, apparently was open to the lounge room. Amy fell asleep on the couch. A storm was in the area. Around 11:15 p.m., Petra was woken, and when she entered the adjacent lounge was confronted by an extraordinary sight, that quickly overwhelmed her. A rectangular beam of light was being projected through the open window of the trailer lounge room. This light beam appeared to be truncated at the end. Inside the beam Petra claims to have seen Amy in a sleep prone position, being carried out head first through the window. Underneath her, also within the beam were the items that had been on the coffee table adjacent to the couch Amy had been on. Before fainting in shock Petra saw that the beam was coming from a disk shaped UFO hovering just above the ground a short distance away, near a tree at the rear of the clear section, immediately behind the annex trailer house.

Petra believes she was only in a faint for a very short period of time. Regaining consciousness, she began screaming. Keith was awoken by the commotion coming from Petra. As he came from the bedroom and stepped down into the lounge room annex, Keith was confronted by the sight of a highly agitated Petra, along with the contents of the coffee table on the floor in front of the window. He soon realized that the window screen was torn in both a vertical fashion and along the bottom of the window frame. Keith indicated that initially he couldn't get any sense out of Petra who was crying and very agitated, so he rushed outside trying to locate Amy, who was nowhere to be found. Keith started to be less agitated himself, he was eventually able to get from Petra an idea of what happened. Keith initially refused to believe what Petra was telling him and he rushed outside again trying to find his wife. Eventually as the situation became clearer, about 11.40 p.m., Keith called the police. Reporting that his wife had been abducted and imploring that the police should come out. The manning status at that time meant there were some delays in them coming out, but about 90 minutes after the initial call Senior Constable Robert Maragna from Tiaro, & an officer from Maryborough arrived. Initially police thought they might have been walking into a situation involving foul play, even perhaps a murder scene, but then the bizarre circumstances of the events came into focus. Keith & Petra, at the Gundiah property were relating that Amy Rylance had been abducted by a spaceship. The officers were struggling to keep an open mind.

They were joined later by Sgt. John Bosnjak, in charge of the Tiaro police. He had been asleep when he was called to assist in the investigation. The 3 officers continued their investigations at the site. They confirmed that Keith Rylance & Petra Heller appeared to be in an agitated state and that there was no sign of Amy Rylance. The torn screen was examined. A flowering bush, commonly known as yesterday, today, tomorrow was located immediately outside the left side of window, had indications of possibly being affected by heat or another mechanism along its right side. Oddly another flowering bush, a hibiscus, located immediately on the right hand side of the window area was not affected in the same way. The police took samples for possible later testing.

While the police were at the property, a phone call came through, which was taken by Keith. A woman was calling from Mackay, indicating that she had taken a somewhat distressed and apparently dehydrated young woman from a BP service station on the northern outskirts of central Queensland city of Mackay, 500 miles to the north of the Gundiah-Tiaro area. The young woman turned out to be Amy Rylance, and the female caller was calling to advise that Amy was apparently all right and was at the Mackay hospital, where she had been examined by a doctor. Keith handed the phone to Marangna. Given these extraordinary circumstances Mackay police were called in, making a total of three police stations involved in the investigation Tiaro, Maryborough, & Mackay, 500 miles to the north. A statement was notarized by the Mackay police with a Justice Act acknowledgement, that required Amy to acknowledge that what she had stated was true to the best of her knowledge and belief, & that if it is admitted as evidence, that she may be liable to prosecution if she had indicated anything in it that she knew was false.

The statement indicated that she only recollected lying on the couch at the Gundiah property. She had no recollection of the events that Petra described, but then remembered waking up lying on a bench in a strange rectangular room. Illumination came from the walls and the ceiling. She was alone. She called out and heard what seemed to be a male voice, asking her to be calm and that everything would be alright and that she would not be harmed. Soon an opening appeared in the wall and a guy about 6' tall walked into the room. He was slender in build but in perfect proportion, covered head to foot in a full body suit. He had what seemed to be a black covering mask on his face, with a hole for his eyes, nose and mouth. He repeated his calming assurances. Amy felt she had been there a while. The guy told her they were returning her to a place not far from where they took her from, because the lights were wrong at the property and it wasn't safe. She then found herself lying on the bed and falling asleep.

She recollected that she woke up on the ground with trees around her, felt disorientated, could smell the ocean, and indicated she was not sure how long she tumbled through bushland, but seemingly it was for a long time, but she felt she wasn't making much progress. She then came onto a road that looked like a highway and saw a light from a petrol station. She walked into the station, where staff seeing her state, tried to offer some assistance. She accepted some water, as she felt somewhat dehydrated. Initially she was not able to answer identifying questions, and didn't know where she was. She was asked if she had been drinking or was on drugs, to which she said no. Amy indicated she felt tired, sore, drained & lethargic. She asked a woman at the service station to take her to the hospital, as she didn't know of where else to go. The woman and her friend took Amy to the hospital.

Later Amy spoke with two police officers, and with her husband Keith from the hospital. She then went to Mackay police station where she gave the statement of events. Amy also indicated that this sort of thing had never happened to her before, but when she was in 5th year school she had seen a large UFO surrounded by smaller objects.

The police arranged to put Amy in a motel pending the arrival of her husband. He & Petra arrived during the day and they spent considerable time with Amy discussing what happen. Extensive notes were made, photographs were taken of a triangular arrangement of marks on her inner right thigh, marks on each heel and the growing out of her hair which she had dyed earlier in the week. Her hair started to show her former color, suggestive that some considerable time had passed for her, indicative of rather more than a few hours. Body hair had also become somewhat more pronounced that otherwise would be apparent for the short time involved.