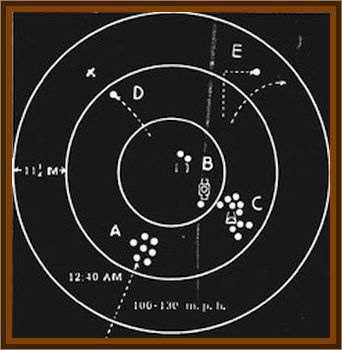 Location: Above The Gulf of Mexico

On a moonlight night, a B-29 bomber of the US Air Force was cruising at the altitude of 18,000' above the Gulf of Mexico, 100 miles south of Louisiana, on a bearing which has not been disclosed, and had been on a night training flight and the mission was at its end, the plane was now traveling back to its home base.

The 4 man crew comprised of:

Lieutenant Coleman was watching his radar, waiting to detect the coastline. At 5:25 a.m. local time, he saw a fast moving target on the scope, approaching the plane from ahead, at the relative direction of 12 o'clock. What puzzled Coleman is that between each sweep of the radar, the object seemed to have moved 13 nautical miles towards the B-29, which he knew was a speed impossible to any known aircraft. He used his stopwatch to measure the speed of the object and calculated that it was flying at the speed of 5,240 mph, and decided to alert the flight commander, Captain Harter. Harter replied that such as speed was impossible and asked Coleman to recalibrate.

As Coleman was recalibrating, 4 other blips of an unknown nature appeared on the radar, but also on Harders radar as well as the navigators, also at the relative position of 12 o'clock, and also approaching the B-29 at high speed. Coleman was done recalibrating, finding out that the calibration was correct from the start, and the radar was functioning correctly. At this time, one of the blips on radar, left the group of 4 blips and accelerated, approaching the B-29, coming very near. Master Sergeant Bailey noted that, and rushed to the right waist blister to try to see what the object was. He was totally bewildered to see that indeed at the expected position, an object was visible, a blue object streaking by the plane and to the right, circling around it.

Then, a second group of blips appeared on all radars, the crew was now aware that there was something strange going on. The new group of objects also appeared at the relative position of 12 o'clock, they were rushing towards the bomber, this time missing the bomber by several miles. Their speed was calculated with the stop watch, it was also 5,000+ mph. At 5:31 a.m., radar was clear again. The crew who had been on wits end, relaxed a bit. Until a third group of blips appeared on the scope, also coming from their 12 o'clock position. Lieutenant Coleman, again using the stopwatch with Master Sergeant Bailey was doing the calculation, the objects of this group moved at a speed above 5000 mph This time, it was the flight navigator who rushed to the right waist blister, and could see 2 of the unidentified objects, appearing as blue white lights streaking at a fantastic speed.

Captain Harter was studying his radar, noting that 40 miles behind the B-29, at the relative position of 6 o'clock, a group of 5 objects were cutting the flight path of the B-29, and turned as to follow the B-29 from behind. They were heading straight to the B-29, then slowed down when they were closing in. They remained behind the B-29 for 10 seconds. A larger, much larger, blip appeared on radar. This blip made a motionless half inch spot on the radarscopes, a size impossible of any known plane. The group of 5 objects pacing the B-29 then turned, and started to accelerate. The entire crew saw on their radars that the group approached the huge motionless blip and seemed to merge into it. Only the large blip remained on the scope. In a moment, the huge blip took speed, and was gone.

Coleman called Harter on the intercom, said that he and Bailey clocked the huge blip, You won't believe this. It was making over 9000 mph.

Harter replied: I believe it, all right. That's just what I figured.