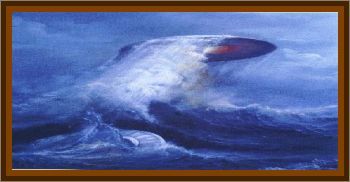 Professor Joao de Freitas Guimaraes recalled that he had gone to São Sebastião in the course of his professional duties as a military advocate. Finding the law court already closed, he had dinner and then, by way of a constitutional, went for a walk along the beach. He cannot be exact as to the time, not having chanced to look at his watch, but estimates that it would be 7:10 p.m. or 7:15 p.m. The sky was overcast, dull, and there was no moon. In the absence of any bench, he sat down on the shore, rested his hands on his knees and remained gazing over the sea, which was quite dark. Suddenly he perceived that it was becoming clearer over the water, in the stretch between Bela Island and São Sebastião. Next, a jet of water arose, like a waterspout, which caused the thought of a whale to cross his mind. Shortly afterwards he made out that it was a pot bellied machine moving in the direction of the beach. Arrived there, it threw out a landing line, equipped with spheres. He noticed particularly that they were spheres, not buoys. From this machine two men then jumped out and walked to meet him. They were two human beings or, at least, they had that appearance. He confesses that he was somewhat alarmed. He got to his feet and, although feeling a certain amount of apprehension, was not inclined to take to flight.

He could now definitely tell that he had to deal with tall individuals, more than 5' 10", with long, fair hair, of clear complexion, and with eyebrows. They wore a kind of one piece garment, green in color, narrowing towards the neck, wrists, and ankles. Their eyes were clear and steady.

The professor asked them whether there had been an accident to the machine or were they seeking someone. He got no reply. Then he tried speaking to them in French, English, and Italian, but still without result, at the time. He got the impression that he was invited to enter the craft. He cannot explain how it was that he came to this conclusion, but the fact is that so he understood. It seemed to him that they were employing a telepathic language. He added that he is not a scientist, that he has not studied matters of this kind but, from what knowledge he has in that respect, he is led to believe that they were utilising such means of communication, although he verified later that they were endowed with articulate speech.

He had never interested himself in the question of flying saucers. Through lack of time, he was almost entirely ignorant of this question. However, it appeared to him that that machine was one of those strange airships. Feeling that the invitation persisted, there came to him, then, an irresistible desire to know what was inside.

Then, one of the crew started in the direction of the machine, turning his back on him. Dr. Freitas Guimaraes followed, without reluctance, accompanied by the other member of the crew. He was thus between the two of them. The one in front reached the lower part of the aircraft and got on board, holding on to a ladder with only one hand. Dr. Freitas Guimaraes required the assistance of both his hands. Dr. Guimaraes could see that in the hatch there was another airman, who had remained there all the time. When the second airman, walking behind our informant, got on board, the apparatus which had been let down was drawn in again and the door closed. The professor said that he had remained in the one compartment but was able to ascertain that there were others, also illuminated.

When the machine rose, he noted that there was water on the portholes, as though it were raining. He enquired, Is it raining? To this he received a reply, telepathically, from one of the crew, to the effect that it was not a question of rain. That water originated from the rotation, in opposite direction, of parts comprised in the saucer. All round the machine there was a ray filtration tube, which produced the effect of a semi-vacuum in each of its parts.

He saw, through the portholes, above the earth, an intensely dark zone where stars shone in an extraordinary manner. This was succeeded by incomparable splendor and then by fresh dark areas. Continuing, they crossed a violet layer, then another one, vivid and dazzling. In the former he felt the machine toss violently. He displayed a little nervousness on this account. Then one of the crew said to him, telepathically, The machine has just left the atmosphere of your planet.

During the trip, he asked them from where they came, but got no reply. He does not know why they did not wish to be identified. When he knew that they were already beyond the earth's atmosphere, he was astonished and frightened. He had noticed, on entering the compartment, a circular instrument on which moved three needles, very sensitive and already quivering. At the point of departure from the earth's atmosphere, these needles commenced to vibrate intensely. Later it was explained to him by one of the crew that the machine was navigated by registration of the conjunction of magnetic forces in the area. The blazing space bodies, diversely colored, and the swiftly flying iridescent clouds together constituted an indescribable spectacle.

On returning, he observed that his watch had stopped. He could not, therefore, be sure how long the flight lasted, but estimates it at 30 or 40 minutes. He went to his hotel and felt inclined to tell everyone of his extraordinary experience.

It seemed to him that the crews of those airships were carrying out an investigation upon the inhabitants of our planet. He had the impression that they were desirous of instructing us as to the dangers which threaten humanity. In the opinion of Professor Freitas Guimaraes, human behavior is almost savage. Man would be born wholly good, but, as a result of conditions inherent upon earth, he degenerates. There are some scientific experiments which are being conducted without due care. The indiscriminate use of the atomic bomb scarcely increases the ionisation of the earth. It does, however, cause the destruction of layers of the atmosphere which filter dangerous rays. If more care is not taken in the use of those terrible devices, we shall all suffer the consequences of such explosions.

Again, the professor states that this occurrence took place about 14 months ago and that, with the exception of his wife, he had told no one of it. About six months afterwards, however, he spoke on the subject to a judge in São Paulo, Dr. Alberto Franco. He also told an old advocate in that capital, Dr. Nilson. During a luncheon which took place at the Advocates Association, he saw an aluminium saucepan and made a jest about it, alluding to flying saucers. His colleagues suspected then that he must know something about these airships, so much talk had been current. Later, however, he narrated the incident to a friend, Dr. Lincoln Feliciano. This latter, naturally, seizing upon the story, transmitted it to the person who wrote the article which has caused so much sensation. He adds that, since that time, he has had no peace. He has been besieged by every manner of means. Although all who approach him may be very friendly, it is becoming, nevertheless, difficult for him to explain exactly what transpired. For example, imagine someone who, during a strange journey, had seen, for the first time, a pneumatic machine and had wished, on his return, to describe it to people who were interested but had no knowledge of it. It is clear that he would not be able to do so accurately. The facts he witnessed passed his comprehension.

He declared, subsequently, that he had not been the first citizen of this world to travel in those machines. He informs us that, since his adventure has been divulged by the press, a list of works upon the subject has been received, in some of which are detailed experiences similar to those he underwent.

Questioned as to whether he felt ill during the trip, he replied that he had felt none too well when the saucer took off and when it landed. He felt pain and cold in his extremities. He attributed that to a natural nervous tension.

He declares that a further meeting with the crew of the machine had been arranged for August that year: August 12, 1957. Asked about the way in which that meeting had been defined, it transpired that, in the course of the voyage, the crew showed him 12 constellations, disposed in the form of the Zodiac. A wheel indicated the year, and repetition, a dozen times, of the number 8 conveyed to him the month of August. Thus he interpreted it as being the date in question. To enquiries as to what had prevented him from keeping the appointment made, he replied that he would not have been able to go. A party had been organised to attend the interview, which would have caused a sensation. He had, moreover, in the meantime, lost near relations. Besides, he had been approached by an official of the F.A.B. (Força Aérea Brasileira), who asked him not to go for this meeting. He referred, also, to the fact that the Air Force had sent pursuit planes (jets), which could be the cause of serious incidents. If one of these aircraft came into contact with the saucer, that could seem like an act of treachery on his part. It would be considered a breach of faith if he were to contribute towards creating an unwelcome situation for those beings who were so considerate to him. He confesses to more prudence than curiosity.