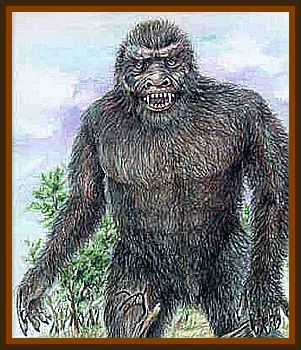 A farmer went into his snow covered field one night and saw enormous tracks that looked like those belonging to an overgrown wolf. He followed the tracks with a blacksmith for 2 miles, and they led to a scene of mutilation, which made the villagers in the area quake with fear that night.

One snow covered field was a lake of blood dotted with carcasses of sheep, cattle, and even the farmer’s dog.

The farmer was found locked up in his house in a terrible state. He wasn’t harmed physically, but he was terrified. He had barricaded himself in after witnessing an enormous black animal that resembled a wolf ripping the throat out of his sheepdog.

The animal had then gone for the farmer, but he had managed to run into the farmhouse in time. He had bolted the heavy oaken door and hid under a table in the kitchen armed only with a pitch fork.

The farmer said the wolf pounded on the heavy oak door, almost knocking it off its hinges. The weird looking animal then stood up on its hind legs like a human and looked in through the windows of the farmhouse.

Its eyes were blue and seemed intelligent and almost human like. The beast foamed at the mouth as it peered in, then bolted from the window to the farm.