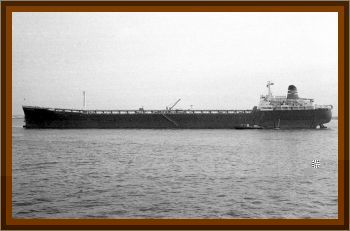 The Grenadier was an oil tanker which was involved in one of the most prolonged UFO sightings by any ocean going vessel. It began on day one as arrowhead shaped UFO was seen hovering above the ship at 12:01 a.m. Unbelievably, this object remained with the ship for three days. The UFO was estimated as being a mile in altitude, and during daylight hours, it was a dark blue color. At night, however, it became a silvery light. Weather conditions were good, and seas were calm during the three day sighting.

On the first day of the object’s presence, the ships engines suddenly stopped leaving only emergency lighting & steering were available. The crew manually restarted the engines, which took time as all the pumps had to be shut down and restarted.

The second day, the ship’s food storage refrigeration stopped operating, although no reason was found for the power outage.

On the third day at 11.45 p.m. a crew member noticed that the lights were out in the ships air conditioning room and a door leading to the crews accommodation was opened. The engineer passed through the door to investigate and spoke to two firemen. But the next day the same door was found welded shut, apparently, the door had been welded before the ship left dock because of a fault, but the door was open for the engineer to have walked through it. And the ship’s engines again failing, leaving just emergency lighting and steering at 12:01 a.m. once again. They were restarted once more, but later it was discovered that the starter motor for the emergency diesel generator had been dismantled. All the parts of the generator were neatly placed by the machine as if someone had examined it.

All systems returned to normal later on the last day, as the unknown object vanished from view, never to be seen again by the crew of the Grenadier. All events were entered into the ships logs. It is almost certain that photographs and motion picture film were taken of the object, yet no media has ever been made public.