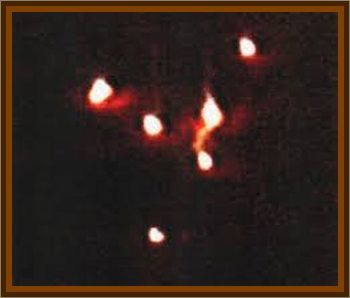 Thousands witnessed a formation of seven luminous lights over Greifswald, Germany. The lights hovered in position for 30 minutes over the Baltic Sea near Peenemunde, the former Nazi V-2 rocket construction site and near the Nuclear Power Plant Greifswald. Among the many eyewitnesses were Russian nuclear physicist working for the installation. German UFO Researchers were able to collect fiveamateur videos of the incident, which enabled them to reconstruct the position of the formation.

Skeptics were quick to refuse this case and identify them as simple signal flares fired into the sky by the Russian or Polish Navy and simply tossed a side the fact that the formation was, without any doubt, hovering over German seas, west of the Polish border. It should be noted that this event was six weeks before Germany’s reunification and any attempt at a military manoeuvre such as flares so shortly before the German reunification would havebeen considered an act of aggression and would have caused major diplomatic protests. The three videos were taken by Russian Nuclear Physicist Dr. Ludmilla Ivanova from Greifswald, Bernhard Grochel from Ucheritz-Bansin on Usedom and Jurgen Luchterhand, east of Greifswald.